The 2016-17 Performing Arts Series builds on previous years with returning acts and a diverse lineup.

The 2016-17 season of the Goshen College Performing Arts Series will again bring world-class performers to Goshen College’s Music Center, with a diverse and international lineup that represents new and returning artists from many countries, including England, South Africa, Ireland, Ukraine, Norway and Argentina, along with celebrated musicians from the United States.

The line-up was publicly announced on Saturday, May 14, during the final performance of the 2015-16 season: Reinventing Radio: An Evening with Ira Glass. Initial reservations were available immediately following the concert, and season package tickets formally go on sale to the public on Monday, May 16 at 8 a.m. at the college’s Welcome Center. Individual concert tickets will go on sale August 1, 2016.

This special double bill concert will be a Midwestern musical night for the soul! Described as a “prairie mystic” by the Boston Globe, Indiana-based singer-songwriter Carrie Newcomer’s music has always explored the intersection of the spiritual and the daily, the sacred and the ordinary. Newcomer has attracted a devoted and international following with her warm voice and exquisite melodies. And when you listen to Ohio-based Over the Rhine, the supremely talented wife-husband jazzy folk duo, you will quickly fall under the spell of their compelling, soothing and earthy voices, and their insightful lyrics. God, love and death often show up in their faith-infused music as the couple – Linford Detweiler, pianist and guitarist, and Karin Bergquist, vocalist and guitarist – explore life’s biggest questions.
Non-package ticket pricing:  $40, $35, $25 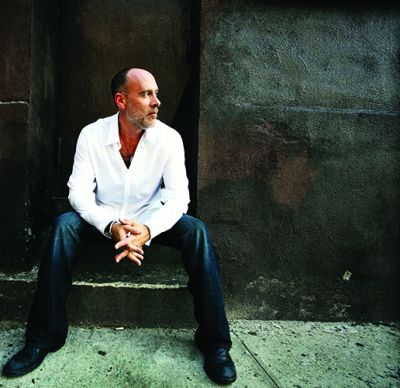 After winning a Grammy for his ballad “Walking in Memphis,” Marc Cohn solidified his place as one of his generation’s most compelling singer-songwriters, combining the precision of a brilliant tunesmith with the passion of a great soul man. He’s a natural storyteller, balancing the exuberant with the poignant, and able to distill universal truth out of his often romantic, drawn-from-life tales. Now, Cohn has put together a 25th anniversary show, performing his debut record from start to finish.
Non-package ticket pricing:  $40, $35, $25 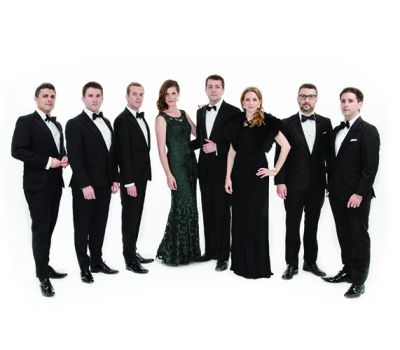 The British vocal ensemble VOCES8 is now established as one of the most versatile and best-loved singing groups in the world. Touring extensively throughout Europe, North America and Asia, the ensemble performs a repertory from Renaissance polyphony to contemporary commissions and arrangements of pop and jazz standards. Their singing has been described as “impeccable in its quality of tone and balance, bringing a new dimension to the word ‘ensemble’ with meticulous timing and tuning.”
Non-package ticket pricing:  $40, $35, $25 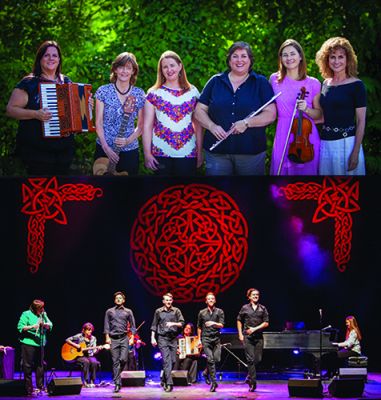 Cherish the Ladies, the popular and highly acclaimed Irish-American band, is returning to Sauder Concert Hall to delight our audience with a Celtic Christmas! Recently celebrating their 25th anniversary, this all-female band combines a spectacular blend of virtuosi instrumental talents, beautiful vocals, captivating arrangements and stunning step dancing. The Boston Globe writes, “It is simply impossible to imagine an audience that wouldn’t enjoy what they do.”
Non-package ticket pricing:  $40, $35, $25 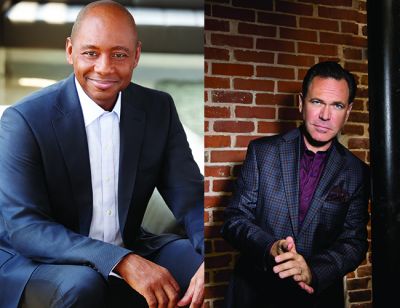 The Branford Marsalis Quartet will be joined by guest-vocalist Kurt Elling in a singular collaboration of musical forces. Following the format of a standard jazz quartet with vocals, the collaboration between jazz’s most intense band and one of jazz’s foremost singers will prove to be anything but standard. The tight-knit working band rarely invites other musicians into the folds of their nearly telepathically cohesive unit, but Elling brings a deep jazz vocabulary, technical versatility and outstanding intonation to the group.
Non-package ticket pricing:  $50, $45, $32 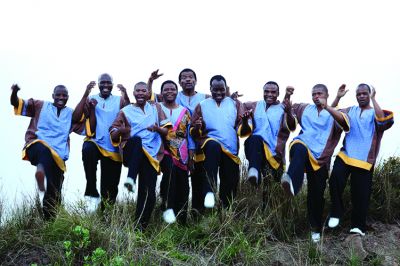 Almost 30 years after they acquired international superstar status with Paul Simon’s Graceland album and after four Grammy Awards, Ladysmith Black Mambazo continues to tour the world as South Africa’s cultural ambassadors. With the power of gospel and the precision of Broadway, Ladysmith Black Mambazo is the undisputed king of mbube, South African a cappella singing. The group came together in the early 1960s, peacefully protesting apartheid through music, and continues to thrill audiences around the world with its strong, proud melodies harmonized in layers of call and response and its joyously energetic performances.
Non-package ticket pricing:  $40, $35, $25 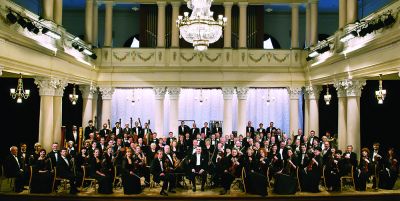 Formed in 1918 and conducted by Volodymyr Sirenko, the 95-member National Symphony Orchestra of Ukraine is considered to be one of the finest symphony orchestras in Eastern Europe with multiple Grammy Award nominations. This distinguished ensemble displays its brilliance, warmth and expressive versatility in splendid works that will feature Tchaikovsky’s Violin Concerto as well as his great Symphony No. 6 “Pathetique.”
Non-package ticket pricing:  $50, $45, $32 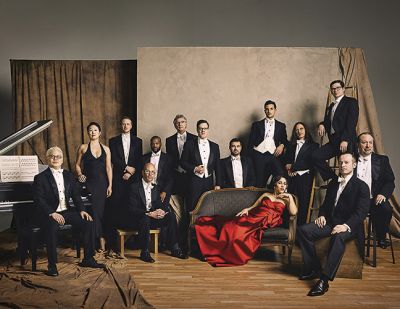 Back by popular demand, this sizzling ensemble returns with their upbeat multilingual repertoire of classical, Latin, big band, samba, pop, and jazz music. Led by pianist Thomas Lauderdale, Pink Martini has gained a national following and has performed with more than 50 orchestras. Join these amazing talents for a not-to-be-missed evening of a musical travelogue from a samba parade in Rio de Janeiro to a quaint piazza in Naples, Italy. Throw yourself at the band’s eclectic tunes like “Sympathique,” “City of Night” and “Brazil,” as well as songs from their forthcoming album, which is set for a 2017 release.
Non-package ticket pricing:  $60, $55, $42 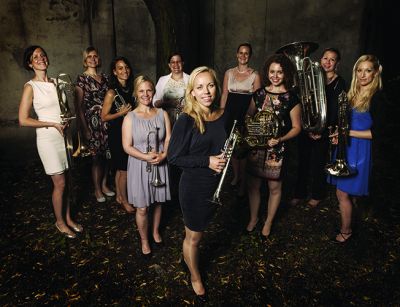 Formed in 2007 by trumpeter Tine Thing Helseth, a rising star in the classical music world, tenThing has rapidly established itself on the international scene and reinvented traditional notions of the brass band. The 10-member, all-female ensemble from Norway performs lively arrangements of works by Weill, Bizet, Grieg, Piazzolla, Albeniz and Mozart, as well as original compositions.
Non-package ticket pricing:  $40, $35, $25 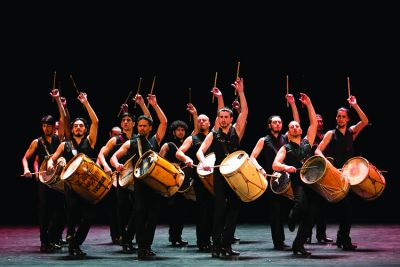 The Argentine-based company Che Malambo excites audiences through precise footwork and rhythmic stomping, drumming of the bombos, and singing and whirling boleadoras (lassos with stones on the end). Presenting a thrilling, percussive dance and music spectacle, the company’s work celebrates the unique South American cowboy tradition of the gaucho. Danced solely by men, the Malambo began in the 17th century as competitive duels that would challenge skills of agility, strength and dexterity. Zapeteo, their fast-paced footwork, is inspired by the rhythm of galloping horses in their native Argentina. Che Malambo brings fiery Malambo traditions and virtuosic dancing to the contemporary stage for an exhilarating and entertaining show that is perfect for the entire family.
Non-package ticket pricing:  $45, $40, $28

Season tickets go on sale to the public on Monday, May 16 at 8 a.m. A nonrefundable deposit of $20 per seat will hold season tickets and seat preference. Full payment is due July 1, 2015. Seats will be assigned according to the date received. Individual tickets, if available, will go on sale Monday, Aug. 1 at the Welcome Center and online at www.goshen.edu/tickets.