Rhiannon Giddens, who earlier this month gave a show-stopping performance at the Americana Music Awards in Nashville, will perform in Goshen College Music Center’s Sauder Concert Hall on Tuesday, Oct. 13 at 7:30 p.m. as part of the Performing Arts Series.

“Tomorrow Is My Turn,” includes songs made famous by the likes of Patsy Cline, Odetta and Nina Simone, was released in February of this year. The album, containing elements of gospel, jazz, blues, country and a dash of proto-rock and roll, explores the creative process of the artist who regards herself more as a singer than a songwriter.

The Carolina Chocolate Drops, formed in 2005, have released seven albums, their latest, “Leaving Eden,” was released in February 2012. In that same year, the Chocolate Drops were nominated for a number of awards by the Chicago Black Theater Alliance and their song “Daughter’s Lament” was featured on “The Hunger Games” soundtrack. 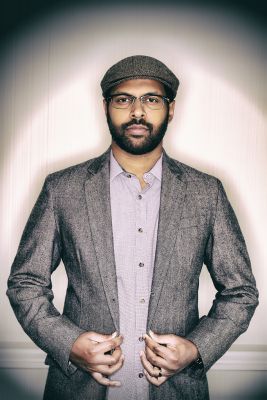 Opening for Giddens is Bhi Bhiman, an American singer/songwriter whose musical style has drawn a diverse range of comparisons from Rodriguez and Woody Guthrie to Nina Simone and Bill Withers. An accomplished guitarist and clever lyricist, it is Bhiman’s unique voice that truly sets him apart. The Washington Post said, “what strikes you first about Bhi Bhiman’s music is his voice — a keening, gender-neutral yawp that’s as earthy as it is ethereal, as puckish as it is wise.”