Sociological surveys may be uncommon evangelistic tools, but at a recent consultation celebrating the conclusion of the Global Anabaptist Profile (GAP), Damien Pelende testified that the GAP survey had indeed drawn new people into his church. The GAP, a joint initiative of the Institute for the Study of Global Anabaptism (ISGA-Goshen College) and Mennonite World Conference (MWC), is a two-year project profiling the demographics, beliefs and practices of 24 church conferences in MWC.

Pelende, a research associate who implemented the GAP survey in the Mennonite Brethren Church of the Congo, shared how the survey generated particular interest in one of the local congregations he visited. As news of the survey spread, curious bystanders showed up for the worship service. In one setting, more than 20 onlookers committed themselves to Christ; another time a Catholic visitor, after reviewing the survey, decided to become a Mennonite.

At the consultation, hosted by the Young Center for Anabaptist and Pietist Studies at Elizabethtown (Pennsylvania) College, from July 26-30, 2015, research associates like Pelende and church leaders from 21 MWC member churches, representing 18 different countries, analyzed the data collected from their respective conferences and shared stories that gave crucial context to the numbers.

The consultation was the culmination of two years of data collection in the project led by John D. Roth, director of the ISGA at Goshen (Indiana) College, and Conrad Kanagy, professor of sociology at Elizabethtown College. In 2013, the same group had met at Goshen College to determine the final content of the survey, structured around the MWC’s “Shared Convictions,” and to receive training in methods of survey implementation. The survey was then translated into 26 different languages before research associates implemented the survey with randomly-selected congregations of their respective national conferences. Kanagy processed and formatted the data prior to the consultation, so that the group could compare their results.

“I’m not aware of any other church fellowship that has done this work,” Kanagy said in his closing remarks on July 29. Indeed, the scope of the project is unprecedented for an ecclesial body, involving national church conferences from Paraguay to Ethiopia to the Philippines to Canada.

Funded and directed by the ISGA, the GAP is the first systematic attempt to gather quantitative data about Anabaptist groups affiliated with MWC, whose membership has more than tripled in the past three decades. Despite this rapid growth, however, there have been few scholarly attempts to understand these groups. “Demographic data has been based largely on estimates,” wrote Roth in a report to research associates. “And we know even less about the theological convictions, worship practices, ethical commitments and forms of witness of many specific Anabaptist-Mennonite groups.”

Although the process of interpreting the survey results has only begun, the data collected from the groups who have completed the survey paints a complex picture of what MWC member churches hold in common and the ways in which they differ from one another.

The results from some conferences, for example, suggested strong opposition to political involvement, which many research associates explained as a reaction to the corruption present in their respective political systems. But others, like Bishop Ephraim Bainet Disi of the Brethren in Christ Church of Malawi, seemed surprised by these results. “I see that many are opposed to this,” said Disi, “but I think it’s better to light a candle than to curse the darkness.” In general support for political participation was highest among North American and European groups.

Consultation participants also noted interesting differences in practices and assumptions regarding the gifts of the Holy Spirit, attitudes toward tithing, understandings of church agencies like Mennonite Central Committee, views on evangelism and the role of women in church leadership. While some conferences do not recognize female pastors, for example, 76 percent of churches surveyed affirmed women as preachers. Some research associates shared that this statistic reflects the reality that the majority of members in their conferences are women.

In their individual presentations, research associates provided critical contextual background in their analysis of the data. Marcos Orozco of the Evangelical Mennonite Church Conference of Nicaragua (CIEMN) referenced his church’s experience during the Sandinista War to explain why CIEMN’s results reflected such a strong opposition to military service. “In the 1980s we had to make a strong statement on military service. We recognized that we would be killing other brothers in the church,” Orozco said. “We were clear that we couldn’t do this.” 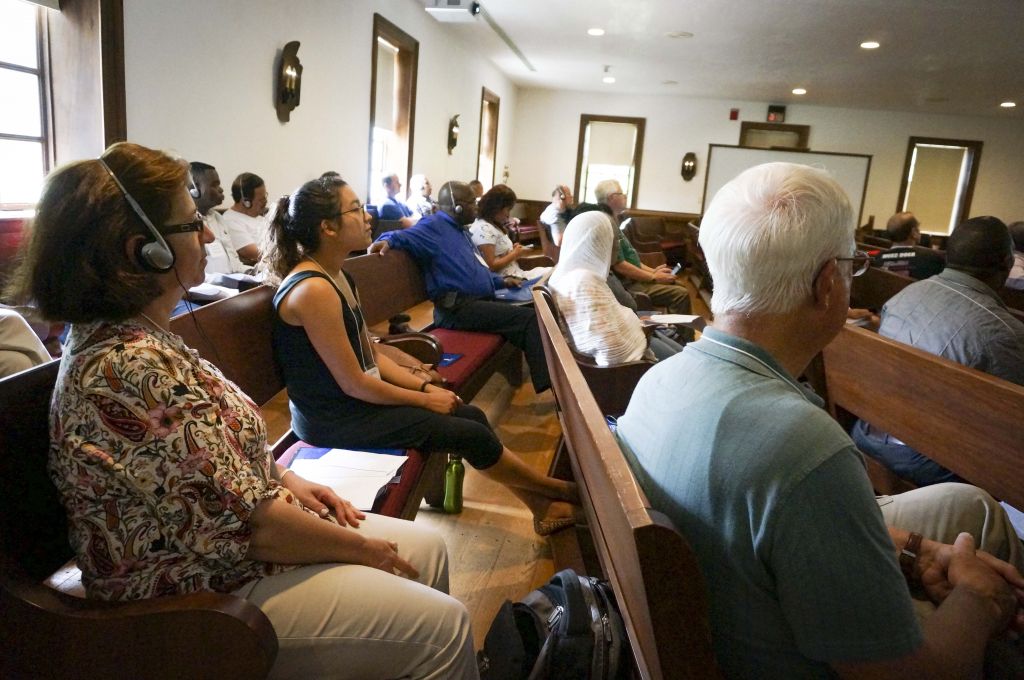 The consultation also provided a forum for research associates to share some of their challenges in implementing the survey. Delbert Erb from the Argentine Mennonite Church collected data from participating churches in Argentina across a distance of 2,000 kilometers (1,243 miles). In the D.R. Congo and in the Philippines, access to some of the most rural and remote congregations proved challenging, necessitating mountain travel and fording rivers. At times the travel was harrowing, but “God protected us,” Pelende assured the group.

The written format of the survey also proved challenging in contexts with higher rates of illiteracy. Some research associates attempted to verbally collect responses with illiterate church members, but the survey’s structure was difficult to adapt. “By the time they hear all the options, they say they don’t know,” reported Jethro Dube of the Brethren in Christ Church in Zimbabwe.

A number of research associates found that illiteracy led to a low response rate among women, since they were more likely than men to be illiterate. They cautioned that even though their churches are majority female, the survey results were sometimes skewed toward a male perspective.

“We know that there are more women [in our churches] than men,” said Damien Pelende, “but they are underrepresented in the survey.” In feedback sessions, research associates brainstormed methodologies that could be used more effectively with both literate and illiterate church members.

Kanagy noted that even when faced with significant challenges, however, the research associates displayed incredible perseverance, courage and vision in implementing the survey and in sharing their own contextual interpretations of the results from their respective conferences.

Although the data has not yet been thoroughly analyzed, conversation at the consultation suggested that the results will be significant for congregations, national conferences and global church bodies alike.

For example, many church leaders highlighted the teaching and discipleship possibilities they perceive emerging as a result of the profile. “We see much in the information that is very valuable to us,” said Reynaldo Vallecillo from Amor Viviente in Honduras. “This helps us see our needs, especially in areas of teaching.”

“We need more teaching on Anabaptism,” echoed Lawrence Coetzee of Grace Community Church in South Africa. Coetzee’s and Vallecillo’s comments were part of a recurring conversation regarding identity. Many at the consultation questioned how such diverse churches could share an identity across varying contexts. Others wondered how to cultivate a strong sense of theological identity within their national conferences.

Yet the data also seemed to suggest that the churches represented by the survey do indeed share beliefs and practices in common. Regina Mondez of the Integrated Mennonite Churches of the Philippines reflected, “I appreciate that despite different languages and cultures, the numbers communicate [a unity] across culture in ways that words could not.”

In general greater commonalities were found among churches of the Global South (Latin America, Asia, and Africa) and among the Global North (North America and Europe) than between those two groupings. This was a source of concern for some, but for others it highlighted the importance of context in analyzing the results and opened up new possibilities for mission engagements.

“I’m happy that we do indeed have shared convictions,” said Orozco. “We note some differences in our cultures, but there are more things that unite us than divide us.”

Roth and Kanagy are still awaiting data from two additional church conferences. When the data is complete, they will release a summary of the aggregate results as well as regional comparisons. The full data will also be made available to the MWC Executive Committee.

“The data is not an end in itself,” Roth emphasized. “This project is only one step toward a richer understanding of who we are as a global fellowship and how our churches are putting the Gospel into practice. My prayer is that the Global Anabaptist Profile will enable us to speak more freely about our weaknesses, to share our gifts more boldly, and to inspire renewal in our Christian faith and life in whatever setting we are in.”