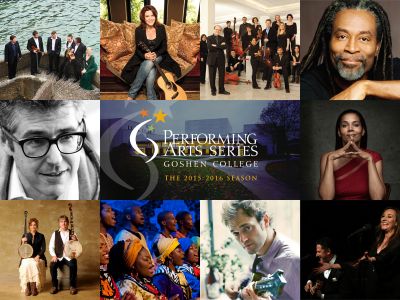 For further information about ticket availability, prices, reservations or more information, contact the Goshen College Welcome Center at (574) 535-7566 or email welcomecenter@goshen.edu. The Welcome Center, located at the north end of the Union Building, is open for business from 8 a.m. to 5 p.m. Monday through Friday.

The 2015-16 line-up was announced in the spring as follows, with individual ticket prices listed:

Jazz guitarist and vocalist John Pizzarelli makes no secret of his musical influences: Nat King Cole, Joao Gilberto, Frank Sinatra and his own father, jazz guitar legend Bucky Pizzarelli. This performance will feature Pizzarelli and his quartet, along with his wife, Broadway star Jessica Molasky, exploring music from the American Songbook, jazz classics and Broadway.

The 15-time Grammy award-winning Béla Fleck and spouse Abigail Washburn have mastered both the banjo and the deceptively intricate art of the duet. Together, Fleck and Washburn take audiences on a captivating musical journey using seven different banjos, blending Appalachian folk, bluegrass and jazz elements, influenced by Washburn’s work in folk music diplomacy in China.

Rhiannon Giddens pays tribute to pioneering female Americana musicians in her first solo album, “Tomorrow Is My Turn,” continuing her Grammy-winning career of bringing powerful song traditions to modern life. While celebrating the old-timey music of the Carolinas’ southern Piedmont region, her brash, youthful energy keeps her live shows exciting and unexpected. This performance will feature Giddens, with an expanded version of the Carolina Chocolate Drops, playing songs from the album, which was produced by the legendary T Bone Burnett.

Multiple Grammy Award winner and MacArthur Fellow Chris Thile, a member of Punch Brothers and Nickel Creek, is a mandolin virtuoso, composer and vocalist. Thile transcends the borders of conventionally circumscribed genres of classical, jazz, rock and bluegrass, creating a distinctly American canon and a new musical aesthetic for performers and audiences alike. This performance will feature solo violin works on the mandolin, drawn from his 2013 recording, “Bach Sonatas & Partitas Vol. 1,” as well as his own compositions.

The Grammy award-winning Soweto Gospel Choir has risen to high acclaim around the world for their unique and energetic performances of African gospel music. Having collaborated with artists including U2, Aretha Franklin, Celine Dion and Robert Plant, the Soweto Gospel Choir has had an incredible journey from the streets of Soweto, South Africa, to the world’s most prestigious venues.

Hailing from historic County Waterford, the acclaimed Irish ensemble Danú celebrates Christmas by taking its audiences on a musical journey to their native land, and features virtuosi on flute, tin whistle, fiddle, button accordion, bouzouki and vocals in both Irish and English. The addition of traditional Irish dance to this high-energy ensemble promises a memorable experience and perfect gift for the entire family.

Singer and songwriter Rosanne Cash and John Leventhal’s exciting show celebrates her multi-Grammy award-winning album, The River and the Thread. Rosanne reconnects with her roots through her own poetic survey of the place of her birth (she is the eldest daughter of Johnny Cash), people and landscapes of the American South. The album features beautiful and varied songs, written with her collaborator, musical director and husband, John Leventhal.

For decades, Bobby McFerrin has broken all the rules. The 10-time Grammy Award winner has blurred the distinction between pop music and fine art, goofing around barefoot in the world’s finest concert halls, exploring uncharted vocal territory, inspiring a whole new generation of a cappella singers and the beatbox movement. Beyond words, beyond genre, beyond expectations, McFerrin incorporates a world of influences to create a primal, universal sound with the original instrument – the human voice.

The creator of the celebrated public radio show This American Life, Ira Glass will talk about his program and how it’s made: what makes a compelling story and where they find the amazing content. As the audience watches, Glass will mix stories, combining his narration with pre-taped quotes and music, and recreating the sound of the show.