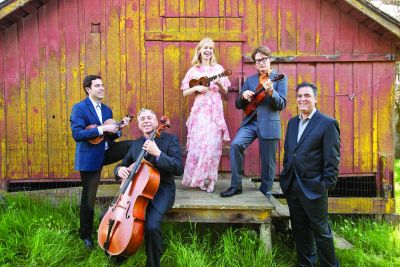 Two-time Grammy award-winning Turtle Island Quartet will team up with special guest Nellie McKay to present a delightful kaleidoscope of voice and strings at Goshen College on Tuesday, April 21 at 7:30 p.m. as part of the Performing Arts Series.

The ensemble will play the music of Billie Holiday, Billy Strayhorn and the 1920s Weimar cabaret.

Turtle Island Quartet merges classical quartet aesthetics with contemporary styles, from folk and swing to hip-hop and Latin American music. Yo-Yo Ma praised the group as “a unified voice that truly breaks new ground – authentic and passionate – a reflection of some of the most creative music-making today.”

Nellie McKay will combine her talents on piano, mallets and ukulele with the string quartet’s innovative rhythmic techniques to bring a touch of Doris Day to the Sauder stage. Famous for her musical wanderlust and playful lyrics, McKay is known as a passionate advocate for feminism, civil rights and other progressive ideals.