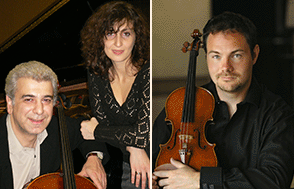 The husband and wife duo of David Machavariani, cello, and Ketevan Badridze, piano, will be joined by Jameson Cooper, violin, during an Afternoon Sabbatical performance on Tuesday, Dec. 9, 2014 at 1 p.m. in the Goshen College Music Center’s Sauder Concert Hall. The event is free and open to the public.

The concert will include a monumental trio by Tchaikovsky and a masterpiece by Piazzolla influenced by Argentinean tangos.

David Machavariani, adjunct cello instructor at Goshen College, was born in Tbilisi, Republic of Georgia. His official musical training started at the age of eight in a special music school for gifted children in the Georgian capital of Tbilisi. He debuted at the age of fourteen with the Georgian National Symphony, and continued his studies at the Tbilisi State Conservatory under the tutelage of Eldar Isakadze and Tamara Gabarashvili (both pupils of Mstislav Rostropovich), and earned his master’s degree with highest distinction. In 1992, by invitation of Indiana University South Bend, Machavariani came to the United States.

Ketevan Badridze, piano instructor at Indiana University South Bend, was born in Tbilisi, Republic of Georgia, and began piano studies at the Georgian Special Music School at a young age. She continued her studies at the Tbilisi State Conservatory and in 1993, upon completion of her postgraduate degree, she was appointed to the piano faculty.

Since her first performance on stage with orchestra at the age of twelve, Ketevan has appeared with the Tbilisi Symphony and Chamber Orchestra, the Erevan Philharmonic Orchestra and BBC Welsh Symphony Orchestra. She was a frequent performer of solo and chamber music in Georgia, France, Belgium, Austria, Italy and Germany.

Jameson Cooper, violin instructor at IUSB and first violin in the highly regarded Euclid string quartet, was born in Sheffield, England, and began studying the violin at age six. He went on to become the concertmaster of the National Youth Chamber Orchestra before entering the Royal Northern College of Music, where he studied with Malcolm Layfield and Wen Zhou Li. He continued his studies in the U.S. with Dorothy Delay, Masao Kawasaki and Roland and Almita Vamos. While studying at Kent State University, he and colleague Jacob Murphy founded the Euclid Quartet. Cooper has performed as soloist in major halls in Europe and the U.S., including most recently at the Kennedy Center in Washington, D.C. He has performed many premieres of solo violin and chamber works. With the Euclid Quartet, Cooper has won numerous competition prizes and performed to critical acclaim throughout the U.S. He has recorded the complete string quartets of Bela Bartok with the Euclid Quartet and a recently released album of solo violin works by Kent State Composers.

Future programs in the 2014-15 Afternoon Sabbatical series include: