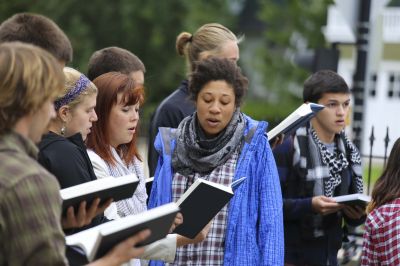 With the goal of uniting in harmony to bring peace to a troubled world, Goshen College’s Hymn Club will bring together students and community members to sing continuously through every verse of all 658 songs in “Hymnal: A Worship Book.”

A hymn marathon fundraiser will start on Friday, Nov. 14 at 7 p.m. and go non-stop through late afternoon on Sunday, Nov. 16, in the Goshen College Newcomer Center Room 19. Students, faculty, congregations and the wider public are all invited to participate in this weekend-long “come and go” event.

“We were in the [college dining hall], where all good ideas are born,” said Bobby Switzer, a senior molecular biology/biochemistry and peace, justice and conflict studies double major from Berne, Indiana, and Hymn Club leader. “We thought, ‘if we’re going to do a big hymn sing, let’s go all in. Let’s go beyond singing just for the sake it. Let’s use it as an opportunity to spread peace in this world of violence.’”

With this goal in mind, the club decided to hold the hymn sing to collect donations for Christian Peacemaker Teams, an organization that engages in active, on-the-ground nonviolent peacemaking. Churches and individuals are invited to support by pledging per hymn. Congregations are also invited to host their own one-hour hymn sings in solidarity.

In addition to raising awareness about Christian peacemaking around the world, Hymn Club hopes the hymn marathon will build community at home. Hymn Club regularly invites the campus community to sing four-part hymns out of the blue Mennonite worship hymnal, sometimes attracting upwards of 200 people.

Watch this video of Hymn Club singing in the college’s student Connector.

“Singing is such an integral part of our identity,” said Joelle Friesen, a sophomore molecular biology/biochemistry major from Normal, Illinois, who is actively involved in Hymn Club. “When you sing, you’re unifying people.”

That’s why the club is reaching out to local congregations, both Mennonite and non-Mennonite, as well as churches around the country. Students in the club have already personally contacted 26 congregations in 11 states and hope to reach many more. 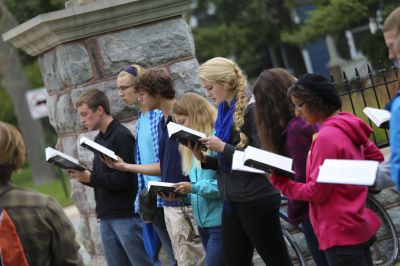 “We’re putting the word out there and letting the spirit take the next step,” Switzer said.

In 2003 as the country prepared to go to war in Iraq, Deb Brubaker, professor of music, organized a 24-hour hymnal-a-thon that took place in the Goshen College Music Center’s Rieth Recital Hall. The singers took hour-long shifts and sang anything they wanted to rather than going straight through the hymnal. Large numbers of people attended the hymn sing, which was featured on NBC Nightly News.

This year’s hymn sing is perhaps the most ambitious yet, with students and community members expected to sing for approximately 48 hours. Hymn Club members have signed up for hour-long shifts to ensure that each voice part is represented in all 658 songs (that’s about 13 songs per hour).

Congregations and individuals who are interested in participating are encouraged to stop by the hymn sing marathon as they are able. Visitor parking is available in the lot behind the Goshen College Newcomer Center, right off of Main Street. All donations are welcome and checks should be made payable to Goshen College with CPT in the memo line. If you have any questions, contact Bobby Switzer at bkswitzer@goshen.edu.