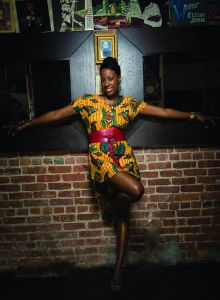 Joelle Dussek ’05 always knew she wanted to work in the television and film industry after college. Today the communication major is living her dream, having worked on the crew of Food Network’s “Chopped,” “CSI New York,” HBO’s “Boardwalk Empire” and the televised ball drop in Times Square on New Year’s Eve 2014.

Dussek got her start in the world of television when she was accepted into Made in NY, a rigorous program that trains women, minorities and struggling New Yorkers for jobs in film and TV production. After graduating, Dussek became a production assistant and eventually worked her way up to field producing shows like “Chopped.”

Last year Dussek landed one of her favorite jobs to date as a studio production coordinator for the late-night comedy talk-show “Totally Biased with Kamau Bell.”

“It was great to be in a diverse staff with people of color,” said Dussek. “I enjoy work where minority voices are a part of the conversation.”