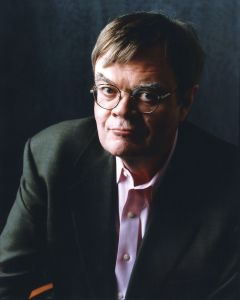 On Tuesday, Oct. 15, one of the most popular American storytellers of all time, Garrison Keillor, will return to Goshen College for the first time since 1985.

Keillor will share hilarious anecdotes about growing up in the Midwest, the people of Lake Wobegon and “late-life fatherhood.” Best known for his popular radio show, A Prairie Home Companion, Keillor is a best-selling author, humorist and captivating speaker who combines poignant storytelling with a wonderfully dry sense of humor.

In January 1985, Keillor visited Goshen College as part of the S.A. Yoder Memorial Lecture Series. He read from his then-new book, “Lake Wobegon Days,” to a packed Church-Chapel, saying that he felt at home among the Mennonites, “the shyest religious group in America.”

THIS SHOW IS SOLD OUT. To add your name to a waiting list, contact the Goshen College Welcome Center by calling (574) 535-7566, or emailing welcomecenter@goshen.edu.