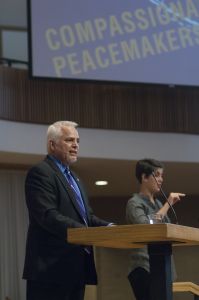 Goshen College President James E. Brenneman opened the new school year with an invitation to the campus to recommit themselves not only to being peacemakers, but to do so with compassion.

“Let us break down walls that would divide us. Let us pursue a compassionate peace that is more relational than legal, more compassionate than particular and more lasting than righteous,” Brenneman said. “…In whatever form our peacemaking takes, let compassion reign.”

Speaking on Wednesday, Sept. 4 at the first all-campus convocation of the 2013-14 academic year, the president encouraged all to learn to break down walls that divide them from others during an address titled “Sowing Compassion! On Becoming Compassionate Peacemakers.”

After welcoming all students, faculty and staff to a new school year, Brenneman’s message focused on compassionate peacemaking, one of the college’s core values and the focus for the year on campus of in-depth reflection, discussion and engagement. The college’s other core values are Christ-centeredness, servant leadership, passionate learning and global citizenship, and each year the college focuses on a different core value.

Brenneman, a 1977 graduate of Goshen College who is starting his eighth year as president, noted that it makes sense that “peacemaking” was named a core value of the college for many reasons, including because it is part of a 500-year-old peace church heritage, because of its history of peace studies/activism and because Jesus himself “came preaching peace.”

“As a college whose peacemaking roots run deep, very deep … naming one of our core values ‘peacemaking,’ seems like a no brainer to me,” he said. “What most intrigues me about the naming of this core value is the modifying adjective, ‘compassionate’: Compassionate Peacemaking. Adding the qualifier ‘compassionate’ to ‘peacemaking’ seems to me to hold within it both a critique and a blessing of the word ‘peacemaking’ that might otherwise have become all too familiar to us here at GC.” 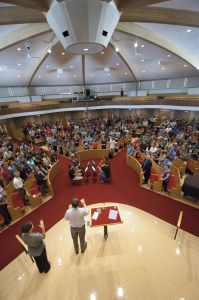 Brenneman noted that not everyone needs to understand what it means to be a compassionate peacemaker in the same way, since everyone comes from different life experiences and cultures. He told four stories to illustrate how individuals have approached this work quite differently.

He first talked about Al Mackowiak, a 39-year veteran of the Goshen police force and now head of the college’s campus safety and security office. “Sometimes the rule of law, the responsibility to protect and the right of protection by the weakest among us, is compassionate peacemaking,” Brenneman said.

He then told the story of Lois Gunden Clemens, a 1936 Goshen College graduate and later a professor, who risked her own life to serve in an orphanage in France during World War II and harbored Jewish refugee children. She was later caught, arrested and held in prison until she was released in a prisoner exchange. “Sometimes the higher law of love requires one to disobey lesser laws,” he said.

Brenneman then told the story of Malala Yousafzai, a 16-year-old Pakastani Muslim who was shot by the Taliban but recently spoke words of peace at the United Nations. “Sometimes it is the innocent, the youth, the child among us who shows what compassionate peacemaking is,” he said. “For Malala, education for all was the heart and soul of compassion.”

Brenneman concluded, “In a word, then, let us recommit ourselves this year, the year of compassionate peacemaking, to walk a mile or two in each others’ shoes … to listen more compassionately to one another, to ask questions of those we do not know, to be more aware of our many privileges and prejudices that keep us apart, to learn from one another about how making peace may even require different ways of doing so between us.” 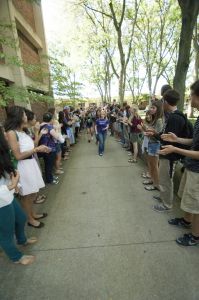 After hearing powerful singing by Parables, the college’s traveling worship team, the gathered group departed the sanctuary and formed an “applause tunnel” – a 12-year tradition — with faculty and staff leading seniors, juniors, sophomores and finally the first-year students. The line progressed outside and concluded as students, faculty and staff gathered for an all-campus photo.

With enthusiasm and excitement, new and returning students began fall semester classes on Sept. 2. On Saturday, Aug. 31, the class of 2017 arrived for orientation and New Student Days, where they moved into their residence halls, met their classmates and became acquainted with the campus.

“This incoming class is one of the most diverse classes in recent memory, with 28 percent of students identifying as non-white, including 18 percent of students who identify as Latino and 7 percent as black or African American,” said James Townsend, vice president of enrollment management and marketing.

Enrollment remained steady for first-year students. The total number of new students on campus this fall is 215, including first-year traditional and students who are either transfer students, were readmitted or have returned for a second undergraduate degree.

Retention – a key measure of student satisfaction – continues to be high at Goshen College. The latest figures show that 77 percent of the 2012-13 first-year students are enrolled this fall. This number is remarkably high for diverse student populations (African American, Latino, Asian and Native American), who maintain an 83 percent retention rate.

The priority application deadline for new students is Dec. 15, 2013. Applications are currently being accepted for undergraduate, graduate and adult programs for the fall of 2014. To apply to Goshen College, visit goshen.edu/apply.