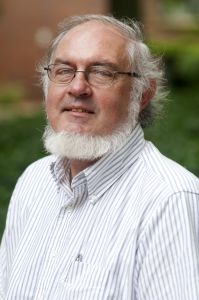 By Mohamed Meissara, for Goshen Commons

If intelligence is measured in the number of languages one speaks, bilingual and trilingual people are smart. But for Paul Keim, who speaks seven languages, a better word to describe him might be brilliant. Or intelligente. Or sprachbegabt.

Keim is a polyglot; he speaks English, German and Polish with considerable fluency. With lesser fluency, he can speak Spanish, French, Modern Hebrew and Arabic (Egyptian).

When I met him for the first time, he spoke to me in my language. I am from Mauritania, in which Arabic is the official language. When my friend—Madi Ouedraogo—from Burkina Faso met him, Keim talked to my friend in French. In class, he talks to his students in English.

>> Read the rest of this article on the Goshen Commons website.