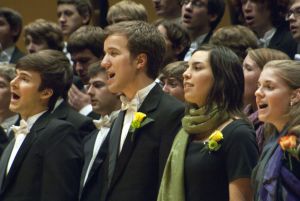 Singing music from multiple regions of the world, the Goshen Choirs will again explore the large palette of sounds available to the human voice in the ninth annual EARTHTONES choral concert on Saturday, April 13 at 7:30 p.m. in Goshen College Music Center’s Sauder Concert Hall.

Performing will be the Goshen College Chorale, Chamber Choir, Men’s Chorus and Women’s World Music Choir. Subtitled “Songs from Many Cultures,” the EARTHTONES program will feature choral works from a wide variety of composers, cultures and countries, including the African-American spiritual tradition, First Nation chant from Canada, Haiti, India, Venezuela, South Africa, Northern Ireland, Finland and an arrangement of a Balinese Monkey Chant. The program will also feature an original composition by GC student composer Levi Smucker, sung in Arabic. The choirs will perform individually and as a joint chorus. During the concert, the choirs will also recognize graduating senior choir members.

Drawing from powerful melodies of almost every continent, EARTHTONES promises to provide a concert of vitality and tone color in a celebration of World Music.

Brubaker, DMA, is professor of music at Goshen College, where she teaches in the areas of vocal and choral music. She holds a Doctor of Musical Arts degree from the University of Kansas, a Master of Music degree from the University of Northern Colorado, and an undergraduate degree in music from Goshen College. Since coming to Goshen in 1999, Brubaker has directed the Goshen College Chorale and Chamber Choir, and has created the Women’s World Music Choir, which performed in Grand Rapids (Mich.) at the ACDA North Central Regional Convention in February 2008. She and her choirs have collaborated and performed with such noted conductors as Alice Parker, Vance George, Donald Neuen, Gregg Smith and Augusta Read Thomas. Brubaker was assistant professor of music at Bluffton College (Ohio) for ten years, and has also taught choir in public schools in Indiana and Colorado. A focus of Brubaker’s research and teaching explores how the use of singing can become a catalyst for connection between people of differing cultures, faiths and circumstances, also highlighting the role of women as creators and sustainers of art and culture.

Hochstetler, DMA, is assistant professor of music at Goshen College, where he teaches in the vocal, choral and opera theater programs. Under his direction, the Goshen College Men’s Chorus has been selected to perform for the ACDA regional convention in March 2012. He is also the director of the St. Joseph Valley Camerata, an area professional choir. Previous appointments include Western Mennonite School (Ore.), the University of Michigan – Flint, and Corban College (Ore.). As a scholar, his work on Vaughan Williams has been published by The Choral Journal, and he is the co-author of the IPA Pronunciation Guide to Translations and Annotations of Choral Repertoire, German Texts. As a baritone, he has performed opera and oratorio roles and given recitals in Indiana, Michigan and Oregon. Hochstetler holds a Doctor of Musical Arts degree in choral conducting from Michigan State University, a double Master of Music degree in conducting and voice from the University of Michigan, and a bachelor’s degree in music and biology from Goshen College.

General admission tickets are $7 adults, $5 seniors/students, available online at www.goshen.edu/tickets or via the Goshen College Welcome Center at (574) 535-7566. Goshen College faculty, staff, and students are free with valid ID.