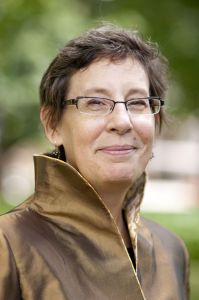 The Executive Board of Mennonite Church USA has appointed Jo-Ann Brant, professor of Bible, religion and philosophy at Goshen College, to the editorial board of the Believers Church Bible Commentary Series as its denominational representative, effective January 2013.

Brant expressed joy and humility in accepting the position to join the board: “I am excited to step into this role. As someone who has always been active in my home congregation, I see this as another way to serve. We hope the message of God’s Word, which is always worthy of more attention, will be brought to life in new ways through these volumes.”

Brant has served on the faculty of Goshen College since 1993. She earned a bachelor’s degree from the University of Alberta in Edmonton, Alberta, and master’s and doctoral degrees from McMaster University in Hamilton, Ontario. She will be replacing retired bishop and seminary instructor Paul M. Zehr, who served as the chair of the editorial council of the series for more than 25 years.

“Jo-Ann’s love of Scripture is palpable in all she does and who she is as a person,” said Dr. James E. Brenneman, president of Goshen College. “She embodies passionate learning and creative energy and is a person of wise counsel. She will bring her whole self to this new role, and Mennonite Church USA and the BCBCS will be the better for it.”

Brant’s editorial roles have included serving as program chair for several sections in the Society of Biblical Literature and as a member of the editorial board of the Journal of Biblical Literature. Her recent publications in New Testament scholarship include two works focusing on the Book of John, as part of the New Testament Paideia Commentary Series (Baker Academic Press, 2011) and the Adult Bible Studies Series (Faith and Life Press, 2012).

“Jo-Ann is a New Testament scholar in every sense of the word, but this professional training is just one of the gifts she brings to the committee,” said Marty Lehman, director of churchwide operations for Mennonite Church USA. “Her wisdom and biblical understanding will be great assets for this role as well.”

The idea for the Believers Church Bible Commentary Series emerged in the mid-1970s when Ben Cutrell, then publisher of Mennonite Publishing House, tested the idea with the various denominations involved and with seminary and Bible college faculties. Cutrell established the structure, and in 1981, began to appoint editors; by 1986, the first volume was published.

The goal of the series is to facilitate Bible study for all and to aid in understanding the original message of Scripture and its meaning for today. Informed by recent scholarship and written for lay leaders, teachers, pastors and students, each volume follows a similar format of five sections: Preview, Outline, Explanatory Notes, Text in Biblical Context and Text in the Life of the Church.

“There are many valuable commentary series in publication,” said Brant. “One of the unique offerings of this series is that it is rooted in the nonviolent framework that molds our tradition, which is a vital voice that is often missing from other interpretations of our sacred texts.”

The range of this voice across generations is another aspect that intrigues Brant.

“The text is always moving and revealing itself in new ways,” she said. “To the first listeners, these words must have resonated as something both surprising and familiar. What’s fascinating is that what was familiar to them is now surprising to us and vice versa. Just like those first listeners, sometimes we need to recharge the familiar—with the help of the Holy Spirit, of course. That’s what I see as the task before this group. That’s the work that brings me to life.”

As of March 2013, there are 26 volumes in the Believers Church Bible Commentary Series, with 12 more volumes covering Old Testament books in process, and six more in writing or development stages from the New Testament. There will be 44 volumes in all when the series is complete, which is projected for 2020.