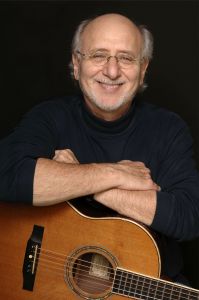 Legendary musician, songwriter and activist Peter Yarrow from “Peter, Paul and Mary” will be performing a solo concert of his songs on civil rights, human rights and peace at Goshen College Music Center’s Sauder Concert Hall on Friday, March 15 at 7:30 p.m.

Tickets cost $20 and can be purchased at the college’s Welcome Center by calling (574) 535-7566, emailing welcomecenter@goshen.edu or visiting goshen.edu/tickets. Proceeds from the concert will further Operation Respect and the Wi’am Center for Peace and Conflict Resolution in Bethlehem, which is directed by Zoughbi Zoughbi, the father of Goshen student, Marcelle Zoughbi, and an organizer of this day of peace.

Yarrow weaves a narrative of his life in music and politics, punctuating the major events with renditions of the iconic songs many know and love. From his life in Greenwich Village in the 1960s, his connections to Bob Dylan and Pete Seeger, and his career as part of the “Peter, Paul and Mary” trio, Yarrow shares a part of American history influenced heavily by music. And he creates community within his audiences through his reflections in both words and music.

His musical creativity has always gone hand in hand with his commitment to social justice and equity in society. And today, he’s reaching a new generation with his music and advocacy. He founded Operation Respect in 1999, a program building safer and more respectful environments for school children worldwide. On behalf of Operation Respect, Yarrow has appeared, pro bono, in concert all over the world. The program has been presented to more than 10 million children.

Yarrow is not about to give up the demanding path he’s chosen. “We’ve lived through a time in which people have felt they could forge their own future and make a better world,” he said. “We may not have achieved our dreams in the time frame that we once believed was possible, but the magnitude of what is yet to be achieved only confirms the importance of our commitment. This is a crucial time in U.S. history, where the avenues of possibility are opening up like never before. Knowing this, we can’t stop now.”

Yarrow and colleague Mark Weiss, Director of Education for Operation Respect, will make a public presentation on March 15 at 10 a.m. during the college’s convocation in the Church-Chapel about Operation Respect, their anti-bullying organization, which advocates interpersonal peace in education.