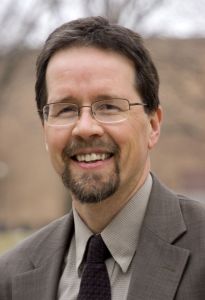 Goshen College Professor of History John D. Roth will present the 2013 C. Henry Smith Peace Lecture on Tuesday, March 5 at 7:30 p.m. in the Goshen College Administration Building Room 28. Roth will speak on “A New Martyr’s Mirror for the 21st Century?” The lecture and Q&A is free and open to the public.

Roth will discuss his new initiative, “The Global Anabaptist Profile and Suffering Church Project.” He proposes that a modern version of the Martyr’s Mirror, a book that collected stories of Anabaptist persecution until 1685, would allow for validation and healing of present-day suffering in the Mennonite church.

Roth sees potential in the project to “renew the Mennonite church in North America by systematically recovering stories of faithful witness in the face of adversity,” he said. His ultimate goal is to form “something like the next volume of the Martyr’s Mirror” by collecting stories from churches in Indonesia and Columbia.