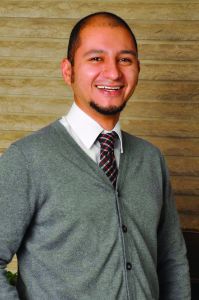 A clean energy catalyst developed by Ulises Martinez ’04 is being used to fuel a concept car in Japan. Daihatsu, a subsidiary of Toyota, implemented Martinez’s catalyst in the FC Show-Case, a zero emissions concept car, which was unveiled at the 42nd Tokyo Motor Show in 2011.

A chemical engineering post-doctoral student at the University of New Mexico (UNM), Martinez spent two years developing a catalyst that powers the carbon-neutral vehicle. “My catalyst is used in hydrazine fuel cells,” said Martinez. “Fuel cells are similar to batteries, the difference is that a fuel cell could continue working as long as fuel is provided, while a battery needs to be recharged.”

Martinez, who majored in chemistry and physics at Goshen College, began studying at UNM in 2006, focusing on biomaterials. When he started his doctoral studies, he decided to change the focus of his research to catalysts for fuel cells. “I decided to go into a field that would be more applied and at the same time was related to my undergrad background,” he said. “With the guidance and encouragement of both of my advisers at Goshen College, Dan Smith and Carl Helrich, I decided to go into chemical engineering.”

Martinez said fuel cell vehicles do not need a traditional engine. “The fuel cell converts the energy stored in fuels into electrical energy by electrochemical reactions. Therefore, it is much more efficient than a combustion engine.”

So why aren’t fuel cells more common? “The main catalyst studied today is platinum, which costs about $1,700 per ounce. The catalyst I developed is nickel- based, which costs about $8 per pound. So the price difference could be a significant driver of this technology.”

Although his research is noteworthy, Martinez is realistic about the real-world application of his catalyst. “This kind of technology has a lapse for it to be available to the public. Batteries used today in hybrid cars were actually developed in the 1960’s,” he said.

“There are several companies, such as Toyota and Nissan, that are planning on bringing fuel cell vehicles to the market by 2020. These fuel cell vehicles will use hydrogen as a fuel, which has been researched over the last 20 years,” he said. “So hopefully our technology could be implemented sometime after that.”

Since the Daihatsu car is only a prototype, there are no plans for mass production. “The ‘body’ of the prototype is not really how the car will eventually look. Daihatsu just used it to exhibit the actual technology, which is included in the chassis of the car,” he said. When a version does go into production, it will look like any other car on the road.