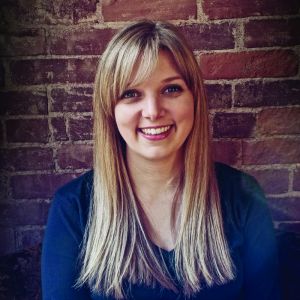 If you’ve never been to Pittsburgh, you might be puzzled by the word “yinz.” To Kate Stoltzfus ’05, “yinz” is more than just Pittsburgh’s colloquial version of “ya’ll”; it is an inspiration.

Stoltzfus became a “Yinzer,” or a Pittsburgh resident, after graduating from Goshen College, and began a year of service through the PULSE program. At the end of that year, leaving Pittsburgh was out of the question. Today, she and her husband Nik Stoltzfus ’03 own and operate Plumb Media, a Web development business, where she serves as a digital strategist.

“Managing all things social” for Plumb Media just tops the long list of Stoltzfus’s endeavors in Pittsburgh. She recently co- founded an organization called Propelle, which helps women entrepreneurs reach their full potential by offering workshops and networking events. She serves as a host with Creative Mornings, a global breakfast lecture series for creative individuals, where she is a driving force behind Team Pittsburgh. She also serves on the board of PULSE and is a massage therapist. Oh, and she plays the ukulele too.

Stoltzfus rounds out her long list of endeavors with what could be her most inspired undertaking: a blog called Yinzpiration. “Yinzpiration is a project highlighting amazing Pittsburghers in their 20s and 30s who are doing inspiring and awesome things,” she said. “Essentially, finding inspiration in the young dreamers and leaders of Pittsburgh is the definition of Yinzpiration.”

The vision for Yinzpiration arose two years ago after Stoltzfus attended a social media boot camp, where a presenter challenged her class to have coffee with someone new every week. She ran with the idea and decided to start her blog, with an aim to interview 100 people. She is on her 66th interview.

In addition to the interviews, which she posts in a Q&A format, she also writes about being “yinzpired” in her many feature posts, often highlighting “fun events and neighborhoods in the city, as well as big picture topics like ‘ways to say thank you’ and ‘taking initiative’ which I hope brings some positivity to my readers,” she said.

While she calls the Steel City home, she fondly remembers her Goshen roots. “I still feel very supported by my Goshen community,” she said. “I’m grateful for the relationships that were formed during my college years, both with friends and professors.”

Stoltzfus grew up in Goshen, where her father, Stuart Showalter was a communication professor (’76-’04) and her mother Shirley Showalter was an English professor (’76-’96) and later became Goshen College’s 14th president (’97-’04). “Goshen College was a huge part of my childhood since my parents worked at the school and we lived right next to the campus,” she said. “It was an awesome way to grow up!”