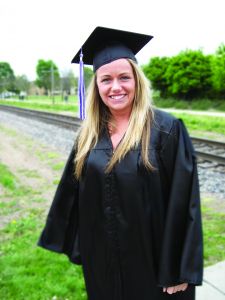 What happens when a needy student cannot get financial aid to attend college? Like other students of Amish descent, Naomi Kramer ’12 faced that dilemma because her parents did not support her decision to attend college.

After five years of sacrifice and struggle, Kramer has achieved her dream. Now she is trying to help others by co-founding the Amish Descendant Scholarship Fund, which aids former Amish people who want to go to college. Kramer started the fund along with three other former Amish: her cousin, Emma Miller, who has a bachelor’s degree in economics from San Diego State University; William Troyer, who is studying at the University of Akron; and Saloma Furlong, who graduated from Smith College and is the author of the memoir, “Why I Left the Amish.”

“Not only can the parents not help pay for school fees, in many cases the student cannot live at home with the parents or get any financial help since the parents are not supportive of them getting their education,” said Miller, who left her Amish family in Missouri when she was 16 and now is working on a master’s degree in economics and finance at London Metropolitan University. “So they’re paying for their tuition and completely supporting themselves at the same time.”

In addition, most students of Amish descent cannot receive federal aid because in order to qualify, students must complete the Free Application for Federal Student Aid (FAFSA), which requires a parent’s signature if the student is younger than 24. “My decision to leave the Amish and go to college was obviously not what my parents had wished for me and I did not want to disrespect them by asking them to fill out the FAFSA,” Miller said. “So for the first three years, I did not get any financial help.”

The same was true for Kramer, who grew up in Jamesport, Mo., and started working when she was 13, first in a bakery then taking care of a garden at a boarding school. “As I approached 19, I had a feeling of discontent,” she said. “The next stop for me was to get married and settle down, but I wanted to see the world. I felt called to do something more.”

Kramer left home, moved to Sarasota, Fla., began working in a nursing home and studied for the GED test. It was while working as a nurse’s aid that she realized she wanted to be a nurse. “I had a non- responsive patient I was working with, and one day I decided to take the patient’s hand and began singing to her. I think it was ‘What a Friend We Have in Jesus,’” said Kramer. “The patient began crying and I knew that she could hear and feel what I was doing.”

Kramer said it took a while to adjust after leaving her Amish community. “I still wore a head covering to bed for a while, since we were taught growing up that Jesus could come to you at any time, even at night,” she said. Eventually, she came to enjoy things like driving a car and using a cell phone.

Although Kramer has maintained a good relationship with her parents and six siblings (two of whom also have left the Amish way of life), they disagree on the value of higher education. That issue divides other Amish children who want to pursue an education, said Goshen College Professor of History Steve Nolt ’90, an expert on the Amish.

“Amish parents would typically say that eight grades of normal schooling is all one needs to live a successful and contented Amish life. Amish people would say that your most important education doesn’t happen in school, but that education is broader than that,” Nolt said. For the Amish, having an apprenticeship or working on a farm or in a family business is far more important.

“There are also issues with the fact that higher education in general stresses critical thinking, creative thought and individual expression, and those are all values that run counter to the predominant Amish values of cooperation, humility, community, separation and obedience,” said Nolt. “So high schools and colleges are schooling people in values that are quite different from the predominant Amish cultural values.”

Kramer agreed, “The Amish mindset is that further education leads to jobs of the world, leading you astray of the simple life.”

So when Kramer and Miller decided to go to college, it meant leaving their community and everything they knew. Since they chose to leave before being baptized into the Amish church, they are still able to maintain contact with their families. In contrast, Nolt explained, those who join the church through baptism and then decide to leave are excommunicated and shunned.

Those who leave the church before baptism often receive financial support, although the amount varies based on relationships within families and whether the parents have a conservative or progressive outlook, said Nolt.

In her case, Kramer began her higher education at a community college in Florida. After a year, she decided to seek a college that would be a better cultural fit – one near an Amish community. Eventually, she learned about Goshen College through an online search and enrolled in 2008.

“Financially it was hard. I always struggled to work hard during the summer and the school year and I put what I earned toward college,” Kramer said. She also received some grants and took out loans her last two years. And a few people also made contributions to support her education.

Among those who helped was Esther Kern ’67, who was raised in an Old Order Amish family. After completing high school, she worked as a nanny in Goshen, where she met Isabelle Chapman, the sister of Harold Schrock, one of Goshen College’s most generous donors.

Chapman was fascinated by Kern’s story, and one day asked Kern what she wanted to do with her life. Kern said that she wanted to be a nurse. Since all of the money that Kern earned went to her parents, and they didn’t approve of higher education, Kern said that she had no way of paying for nursing school. Chapman encouraged Kern to apply to the Goshen College nursing program, and provided financial support each semester.

When she graduated, Kern approached Chapman about repaying her debt. “She said, ‘You don’t owe me a cent. You are doing a service to your fellow man. I’m too old to do that, but I have the money to help you do it.’ It was such an incredible gift.”

In October 2010, Kern met Kramer and decided to pay forward Chapman’s generosity. “I’m 70 years old, and I feel as though I’m still honoring the gift Isabelle gave to me,” Kern said.

Kramer said her commencement was an amazing day, because her entire family attended. “I never knew when I started I would have that day – graduation.”

She now works as a medical surgical nurse at Memorial Hospital of South Bend and is happy to be putting her education to use. “It feels like a really good accomplishment. Amish women are raised to be nurturing. It was rooted in me that my role should be as a housewife and mother. I’ve really liked that I’ve been able to [be nurturing] in my career.”