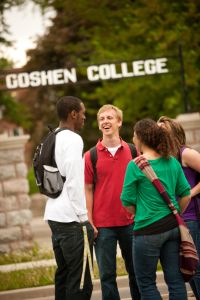 While continuing to maintain a quality college education and strong student satisfaction, Goshen College is also an affordable option by having a lower sticker price, offering significant financial aid packages and keeping graduation debt levels down.

The next opportunity to visit Goshen College during a Campus Open House is on Nov. 9. Go to www.goshen.edu/admission/visit/openhouse to register. The priority application deadline for next school year is Dec. 15.

Kiplinger’s chooses from a pool of more than 600 schools and creates two lists – the top 100 best values in private colleges and the 100 best values in private liberal arts colleges (which Goshen is on). The schools on the two lists were ranked according to academic quality and affordability, with quality accounting for the majority of the total. Criteria included cost and financial aid, competitiveness, academic support, graduation rates and student indebtedness.

“The institutions on Kiplinger’s rankings for best value in private colleges represent schools that provide high-quality academics as well as affordable cost even in these tough times,” said Jane Bennett Clark, senior associate editor for Kiplinger’s Personal Finance. “With money tight and the college choice so important, you have every reason to expect the best bang for your buck.”

The rankings are available online at www.kiplinger.com/links/college, and will be published in the magazine’s December issue on newsstands Nov. 6.