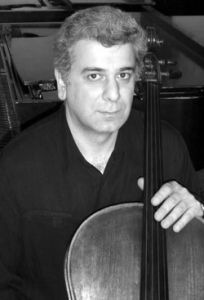 Machavariani will be joined by his wife, pianist Ketevan Badridze, and violinist Christopher Nemeth in performances of César Franck’s “Sonata for Cello and Piano in A Major” and Antonín Dvorák’s “‘Dumky’ Trio for Violin, Piano and Cello in E minor, Op. 90.

Tickets are $7 adults, $5 seniors/students. General admission tickets are available at the door one hour before the recital.

Machavariani teaches cello at Goshen College and at Indiana University-South Bend (IUSB). He was born in Tbilisi, Republic of Georgia. His official musical training started at the age of 8 in a special music school for gifted children. He debuted at the age of 14 with the Georgian National Symphony, performing Haydn’s “Concerto in C major.” He continued his studies at the Tbilisi State Conservatory, and earned a master’s degree with highest distinction. After graduation, Machavariani joined the cello faculty at Surami (Georgia) from 1985 to 1988 and began work on a post-graduate diploma at the Tbilisi State Conservatory, earning his degree with highest distinction in 1989. He was invited to become part of the faculty at a music school for gifted children, giving cello instruction. From 1990 to 1992, Machavariani was a member of the cello faculty at Tbilisi State Conservatory.