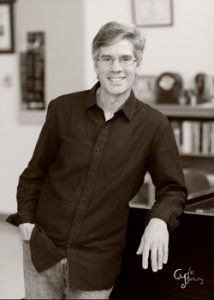 GOSHEN, Ind. – Dr. Matthew Hill, professor of music and chair of the Music Department, will present a special solo piano recital to mark the release of his new CD “Silent Colors,” on Friday, Feb. 17 at 7:30 p.m. in Goshen College Music Center’s Rieth Recital Hall. The program will include music by Debussy, Messiaen, Scriabin and Liszt. Tickets cost $7 for adults, $5 for students/seniors, are free for GC students and faculty/staff and are available at the door an hour before the concert.

Hill recorded “Silent Colors” while on sabbatical in the spring of 2011. Both “Silent Colors,” which is on the Blue Griffin label, and the recital explore sound as it relates to color, the interrelationship of music and silence, and religious symbolism.

Hill received a doctorate in piano performance from the University of Wisconsin-Madison under the tutelage of Howard Karp and has also studied with the renowned Beethoven interpreter Claude Frank. He received a master’s of music degree in piano performance from the University of Kansas as a student of Dr. Richard Angeletti, and graduated from Southwest Missouri State University with a bachelor’s in music where he studied with Dr. Garik Pedersen.

Hill presented a series of master classes and a recital performance at the Sichuan Conservatory of Music in Chengdu, China, as well as guest lectures at the Southwest University of Science and Technology in Mianyang. He contributed a chapter to “Silence, Music, Silent Music” (Ashgate, 2007) and has written for Clavier. Hill is an active recitalist, chamber musician and concerto performer, and presents master classes and lectures at the Goshen College Piano Workshop, as well as for music teacher organizations.