GOSHEN, Ind. — A Goshen College English professor and poet has taken the shock and horror of the Oct. 2 Amish school shootings and transformed it into an evocative, deeply affecting work of reflection. 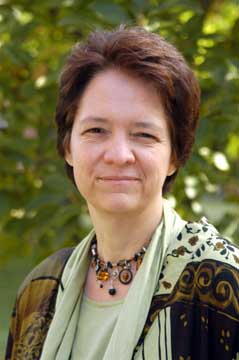 Ann Hostetler, professor of English and chair of the English Department, recently completed a cycle of four “Sonnets for the Amish Girls of Nickel Mines.”

Hostetler – whose father, the late sociologist John A. Hostetler, was raised Amish – said news of the shootings came as a great shock to her last year. “I found it kind of unbelievable at first,” Hostetler said in an interview. “It was the same kind of shock as when one of my friends called me (on Sept. 11, 2001) and said one of the towers just went down.”

On hearing the news, Hostetler said, her mind quickly went to a visit she had made to an Amish school the year before with fellow poet B.H. Fairchild, who had been moved by the school’s “sacred” environment. “It was just an unthinkably violent act,” Hostetler said of the shootings. “And to see how a stranger, an intruder came in and just violated that sacred space . . . I just kept thinking of those little girls standing in front of that blackboard.”

During the incident, which claimed the lives of five Amish schoolgirls in Bart Township, Pa., milk truck driver Charles Carl Roberts IV bound 10 Amish girls and lined them up at the front of their classroom. When Pennsylvania State Police attempted to storm the one-room building, which the gunman had barricaded, Roberts opened fire on the children. He committed suicide when state troopers, eluding a final blast from his shotgun, forced their way in.

In her poems, Hostetler evokes the scene of fear in the schoolroom and the chaos the shootings brought into the quietly ordered Amish world. “The poems come out of a deep inner place,” Hostetler said. “A good poem can provide a space where you can put your complicated thoughts and not feel like you have to come up with a platitude.”

By using the form of a sonnet, with its precise rhyme scheme and meter, Hostetler said she hoped to bring her own kind of order to the subject. “Maybe there’s a kind of formality to processing it this way,” she said. “Maybe the sonnet is a form that can deal with this.”

Hostetler also alludes to the forgiveness the Amish publicly offered to Roberts and the comfort extended to his widow and three small children. “I think there are many people in our world who can’t understand that forgiveness at all,” Hostetler said. “But it’s actually a radical act, the forgiveness there. Their witness is profoundly needed in this world.”

Hostetler has a bachelor’s degree from Kenyon College, a master’s degree from Pennsylvania State and a doctorate degree from the University of Pennsylvania. She began teaching at Goshen College in 1998 and the courses she teaches include introduction to creative writing, poetry writing and creative nonfiction.

She is the author of “Empty Room with Light: Poems” (2002, Dreamseeker Books) and editor of the anthology “A Cappella: Mennonite Voices in Poetry” (2003, University of Iowa Press). She has published articles in the Mennonite Quarterly Review, PMLA and the Emerson Studies Quarterly. Hostetler also has published poetry in “The American Scholar,” “The Cream City Review,” “Mankato Poetry Review” and other literary journals.

Sonnets for the Amish Girls of Nickel Mines

He tied their legs together, made them face

the blackboard, released their brothers, mothers,

teachers, then barred the doors with two-by-fours.

Ten pairs of toes lined up in place.

Ten pairs of arms could not erase

a moment set in motion by such error.

Ten starched white caps could not conceal their terror

Where once they took their turns to stand apart

and write a sum or sentence they had learned,

they now could hear each others’ beating hearts

as his handgun called the roll—Mary,

and Anna Mae – dressed in white by family

and placed in wooden caskets on display

for last loving looks from friends and kin –

past the home of him who took their life away

leaving a family puzzled and betrayed

of all they thought he could be as a man.

Their last journey protected by patrol

– even reporters must have a pass –

they move on to church and grave. We are left

without a verse or story to console

us on an autumn day whose shining grass

reflects the sun, a blue sky of clouds bereft.

to receive the innocent. But those who live

must have their explanation; the other five

they’ll have to live the moments of their pain

even as their families struggle to forgive

the gunman, receive his widow, kids.

For us or them, life will never be the same.

We wait to gather crumbs of consolation

from what they can remember or will tell

of what’s unspeakable: the oldest girl

offering to be shot in lieu of others,

gleaming jars of produce from the farm

of red-beet juice. This red will do no harm.

an offering to those who’ve lost in kind.

in grief that stunned a family unable

to believe what had been done. The Amish

the box of food on the empty kitchen table.

Forgiveness is the unexpected guest.