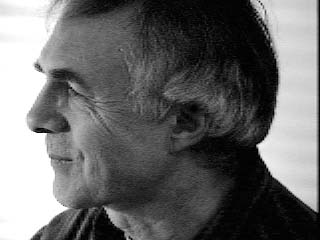 November 3 at 10 a.m. Convocation Presentation: ‘Genuis Loci’ — the spirit of a place.”

An exhibition of Hiebert’s work will be in the Goshen College Art Gallery November 2 to December 1, 1999.

Kenneth Hiebert was born in Minnesota in 1930. He received the B.A. degree in social sciences from Bethel College, Kansas, in 1953 and the Swiss National Diploma in Design with honors from the School of Design in Basel in 1964 after serving with the Mennonite Central Committee in Basel from 1954-1959.

He has taught at the School of Design, Basel; at Carnegie-Mellon University; and since 1966 at what is now The University of the Arts, retiring in 1999. Under his chairmanship for 14 years, the Graphic Design Department evolved into a department of international reputation. He was primary advisor for senior degree projects in graphic design and taught advanced courses in typography and multi-dimensional graphics. In 1973 he was Research Associate in the Arts at Yale University, leading an investigation of latent pattern in vernacular store fronts. He instigated the Òuniversal/UniqueÓ symposium and invitational exhibition at the University of the Arts in 1988. He received the Mary Lou Beitzel Award for Distinguished Teaching in 1990 and the Master Teacher Award of the national Graphic Design Education Association in 1991.

Awards include AIGA 50 Best Books, Communication Graphics, AIGA/Philadelphia Awards of Excellence, New York Type Directors Club, Philadelphia Art Directors Club Gold Medal, the Society of Typographic Arts, and many others. His work is in the permanent collections of the Museum of Modern Art,
Cooper-Hewitt Museum, the Gewerbemuseum Basel, and others. He is a founding member of the Philadelphia AIGA chapter.

Photography, including multi-media presentations, has been exhibited in one-man and group shows. The photo collage series ÒTwelve EclipsesÓ based on Stonehenge was featured as part of PhiladelphiaÕs Mythos Festival in 1991. His current activity is centered around mergers of sound and imagery, combining video, still photography, abstract graphic form, and texts.

Hiebert is the recipient of two individual design arts awards from the National Endowment for the Arts for the documentation of educational processes, including the extensive use of electronic media. The results of this work are described in two books: Graphic Design Processes, published in 1992 by Van Nostrand Reinhold; and Graphic Design Sources published by Yale University Press in Spring 1998.