What follows are pages 52 and 53 of the Fetal Pig Dissection Guide. Note that each major structure is clearly described in the text, and that all descriptions are on the same page (52) as the illustration, or on the facing page (53). 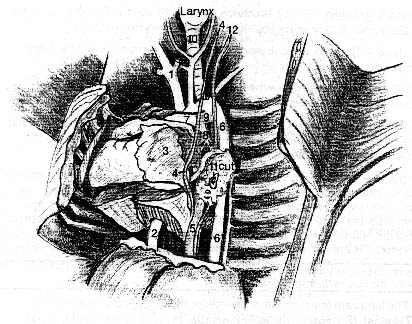 Mediastinum — This is the space between the lungs. Organs in it include the heart, esophagus, aorta, and part of the thymus gland.

1. Anterior Vena Cava — In humans this is called the superior vena cava. This is a short vessel anterior to the right side of the heart. It carries blood to the right atrium.

2. Posterior Vena Cava — In humans this is called the inferior vena cava. This vessel returns blood from the posterior portion of the body. It can be viewed passing through the diaphragm mid-dorsally.

3. Pericardium — This is a membrane similar to the pleura. It also has a visceral part and a parietal part. This visceral pericardium is the thin, shiny membrane on the surface of the heart. The parietal pericardium is much thicker. (Peri = around. Cardio = heart.) There is a small amount of lubricating fluid found between the two layers, in a space known as the pericardial cavity.

Medical Note –
Inflammation of the pericardium is known as *pericarditis. Although it is painful and may be caused by a serious problem, pericarditis is not itself a life-threatening problem unless it is accompanied by fluid accumulation in the pericardial space. Such a fluid accumulation is known as *cardiac tamponade. It interferes with ventricular filling, reducing cardiac output, and can rapidly become life threatening.

4. Phrenic nerve — This nerve passes along the lateral edges of the pericardium. It supplies the muscle of the diaphragm.

7. Pulmonary Trunk — This artery leaves the heart on the ventral surface from the right ventricle and angles to the left.

9. Ductus arteriosus — This short vessel in the fetal pig passes from the pulmonary artery to the aortic arch. Before birth it is used as a shunt to bypass the lungs, which are collapsed. In adults it becomes a small ligament. (See Fig. 43 – Fetal Circulation for a complete description of the fetal circulatory pattern.)

Pulmonary veins — These 4 vessels can be traced returning from the lungs to the left atrium and should be injected with red dye (why should there be red dye in a vein?).

Trace the respiratory tract from larynx through the following structures:

10. Trachea — The structure below the larynx. Note its cartilagenous rings.

11. Bronchi — The branches of the trachea are known as bronchi. They also have cartilagenous rings. See Appendix 2, p. 100, for a more detailed description of bronchial structures.

Medical Note
– An infection of the bronchi is known as #bronchitis. Usually many smaller subdivisions of the bronchi (the *bronchioles) are also involved in this inflammatory process.

12. Vagus nerve (*Cranial Nerve X) — the vagus nerve is somewhat dorsal to the phrenic nerve. On the left side of your pig (the pigís left side), cut the diaphragm near where it attaches to the chest wall, laterally and dorsally. Gently lift up the lungs as far as you can. You will see several prominent structures.

Learn more about the Biology major at Goshen College.