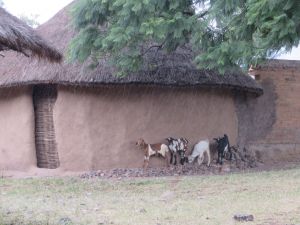 On Thursday morning we left Nata to visit Alia Munley at Ikoma Cultural Center, which is halfway between Nata and Mugumu (about 30-45 minutes from both towns.)  We arrived to Alia having her morning breakfast in the outdoor sitting area in the shade of the trees. She had just finished her morning routine of jogging with her sister to get milk from some nearby farmers.  They jog for about 20 minutes, then walk the hour-long return trip.  She is loving her life on an Ikoma farm!

Alia’s background in art is what led her to be placed at Ikoma Cultural Center.  The center was started by Alia’s host mother, Mama Nuru, as a means to preserve and celebrate the traditional Ikoma tribal traditions.  The cultural center hosts tourists and educational groups who visit the nearby Serengeti National Park. Visitors can stay in small bandas, eat local foods, and participate in cultural dancing.  When our group stayed at the center on our way to Musoma, we participated in the traditional Ikoma fire dance.  According to tradition the Ikoma taught the Maasai and other tribes how to use fire to cook, an important symbol and part of their culture.

Alia is learning a lot about Ikoma culture. The elephant is sacred to the Ikoma and serves as their totem, the Ikoma farm finger millet and raise livestock on a series of hills that overlook a sprawling valley, they prohibit cutting any trees on the hilltops, and they were also traditionally hunters using nets made from sisal to catch small gazelle (they no longer).  The Ikoma are also known for their beadwork, which Alia is learning.

Alia’s project is to create a series of artistic representations of Ikoma culture that can be eventually combined into a pamphlet or brochure for use in promoting and marketing the center to tourists at the nearby lodges. We were very impressed with how Alia has jumped into life on the farm – her curiosity regarding both the cultural history and the current farming practices was contagious. We enjoyed playing with all the baby goats, kittens, puppies, chickens — you name it, there were babies!

– Ryan for the team