Support our students and connect with us on Giving Tuesday. Give now!
Sustainability  —  Green Campus Initiatives  —  Goshen College Solar

Goshen College employs the power of its own solar array to completely fill the energy needs of its Church-Chapel building with 924 solar panels on the roof of the Rec-Fitness Center.

>> View this live data report of the college and church’s solar array.

3.69 – The number of American homes that could be powered for a year using the energy produced by the GC array in one month 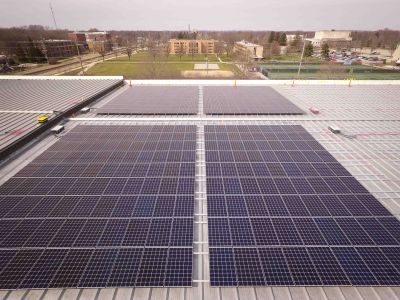 Significant amounts of research and planning were done to ensure that Goshen College would install the most efficient solar array possible. The panels lay flat so that as many panels as possible can be on the roof of the Recreation-Fitness Center. This was done in lieu of tilted panels which would have cast shadows allowing for less panels to be placed overall.

The decision to install solar panels stems from values rooted in environmental stewardship and reflects the efforts of the larger Goshen community to invest in solar energy. The project happened at the same time as a broader local movement called Solarize Goshen, a local project energized by a number of Goshen College alumni that helped grow the number of solar projects in Goshen from 11 prior to 2017 to more than 50 in 2018. In 2017 per capita rankings, the larger community of Goshen now has more solar photovoltaics installed per capita than such solar meccas as Sacramento, Denver and San Francisco. (Indiana’s growing solar capacity is detailed on this interactive map.)

The array serves as not only a source of clean energy, but also as a source of cost-effective energy. The array is expected to pay for itself by 2028, and will afterwards continue to provide Goshen College with clean, free energy.

39.75 – The megawatt-hours of electricity produced by the GC array in one month

Want to check out how the solar array is doing? Click here to view a live report on Goshen College’s solar array.