Quality programs for the community

Afternoon Sabbatical was started by community women and college personnel in 1977 as a way for the community and college to connect through programs that draw on the expertise of Goshen College faculty and community members. The concept has grown into a yearly series with on-campus programs held on a Tuesday of each month during the school year and bus trips for off-campus tours. Campus programs are held in the Music Center Sauder Concert Hall and are followed by a reception in the lobby. On campus programs are free except for the international luncheon held in the Church Fellowship Hall and the Chicago bus trip.

This season we will celebrate our 40th anniversary and final season with a variety of programs that we hope you will enjoy.

“The Life of J. Lawrence Burkholder from the Children” by Myrna Burkholder, Janet and Lauren Friesen

Following a traditional Moroccan meal, discover how friendly and picturesque Morocco has been able to avoid the chaos plaguing other North African countries. Dean will trace Morocco’s past as well as explore the varied peoples and cultures of this on-of-a-kind Muslim nation.

“From Bowers to Venturi: How We Eat Differently in the Maple City,” by Marshall King, local  food writer

Join “Food Guy” Marshall V. King, who grew up in Goshen and has been writing about food since 2000, for a discussion of how ingredients, choices and dishes have changed in this part of the Midwest. He’ll tell stories about growers, restaurateurs and his own journey as a food writer and community journalist. 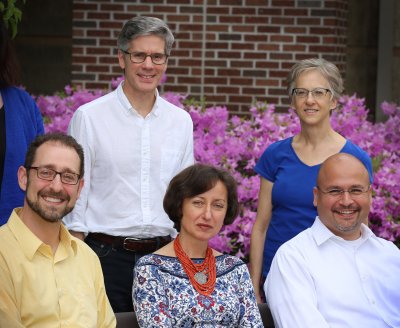 Join us for this rare opportunity to hear Goshen College’s talented  faculty perform some of their  favorite selections. These faculty members are not only great teachers, but exceptional individual performers.

“Why Quality of Place?” by Diana Lawson, CEO of the Elkhart County Convention and Visitors Bureau

Americans – especially the young and talented – are on the move and they are deciding where to live first and how to make a living second. This has led to an influx of the young and talented to vibrant communities, while other places are losing out. It’s important that Elkhart County cities and towns create quality places to attract and retain young talented individuals. Come learn about the Vibrant Communities initiative and how you can be engaged in creating the place you want to live!

Andrew Lloyd Webber’s “beautiful and haunting’ Love Never Dies is the highly acclaimed sequel to the 1986 love story The Phantom of the Opera set against the spellbinding backdrop of Coney Island. The masked phantom has been living amongst the side shows for 10 long years, yearning for his one true love and musical protégée, Christine Daaé. Lured by the bright lights and financial rewards of Coney, Christine and her family flee Manhattan to perform on stage for one last time, but Christine soon discovers the true identity of her mysterious impresario and that all is not what it seems.
Cost: $115 includes: A seating, charter bus transportation and a sack supper. Call 574-535-7564 to register.

Though hymn tunes, chorales and arias, violist Rosalyn Troiano, along with her musical colleagues and viola students, explore the viola as a devotional voice. This musical offering will include original works and arrangements of music by J.S. Bach, W.A. Mozart and hymn tune arrangements by Amos Burkholder.

Details to be announced.