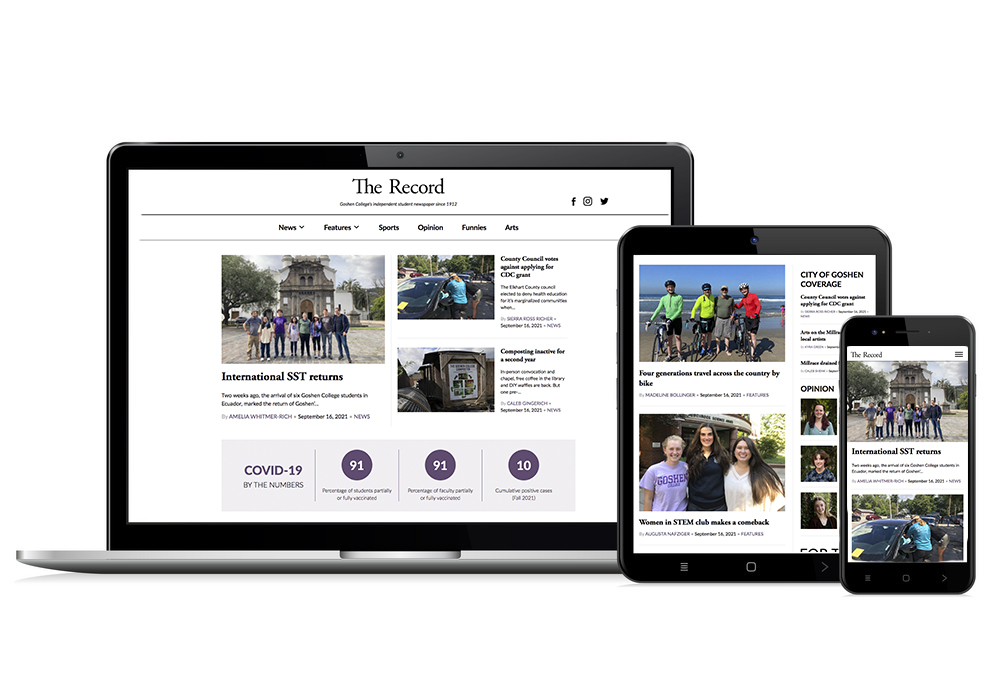 The Record, Goshen College’s student newspaper, officially launched its redesigned website on Sept. 30, culminating a process that began a year ago when LightBox, an agency led by two graduates of the college, agreed to lead the project.

The LightBox co-founders and partners, Jordan Kauffman and Rafael Barahona, turned the redesign into a learning opportunity, bringing on board three students  –  Augusta Nafziger, Jackson Steinmetz and Nick Yutzy  –  to assist at key stages along the way, such as research interviews, mock-ups and coding.

“We still have a WordPress platform, but the models are from different eras,” said Duane Stoltzfus, chair of the communication department and Record faculty adviser. “The earlier site was developed by a talented student in 2008, a few years after Facebook and YouTube appeared. The need for a Record upgrade was abundantly clear.”

The site lacked accessibility and the archive was disorganized. “One of the biggest issues with any student-produced product is the brain drain that occurs,” Kauffman said. “The knowledge base disappears as people graduate.”

As a result, article formatting changed regularly, and the archive was difficult to navigate. The archives as redesigned will include content going back to 2008 with plans to digitize the archive dating all the way back to 1912, when students took charge of editing the newspaper.

“When LightBox agreed to the redesign under generous terms, and when former Record editors quickly responded with generous donations, we knew that the stars had aligned,” Stoltzfus said. “We hope that our readers will recognize and embrace the transformation as readily as we did.”

The design team at LightBox began working on the site at the beginning of the year. They started with research to determine the wants and needs of a new site.

Interviews were conducted with faculty, students and alumni who would have insights into the use of the website.

Nick Yutzy, who graduated in May 2021 with a communication major, joined the project with experience as both a LightBox intern and a Record executive editor. Yutzy was well suited to provide insight about the site and how it would be used by staff and readers.

“You understand the importance of the newspaper when you’re in it and when you’re reporting for it and you want that to be as accessible as possible,” he said.

Yutzy was excited to be part of the Record upgrade. He took charge of the preliminary design and created the new nameplate.

The team grew larger with the addition of summer interns Jackson Steinmetz and Augusta Nafziger, who were brought in to help transfer content to the new site while Yutzy designed mockups and Kauffman worked on coding the website with another member of the LightBox Collective, Alex Dugger.

They made a straightforward interface for Record staff members to use for regular news postings and for the next student project: archiving the 95 years of Record content still to be digitized.

The redesigned Record website, record.goshen.edu, remains free to readers. The newspaper is also available in a print edition for $20 per year, a subscription price that has held steady for more than 20 years. A subscription link is on the website.