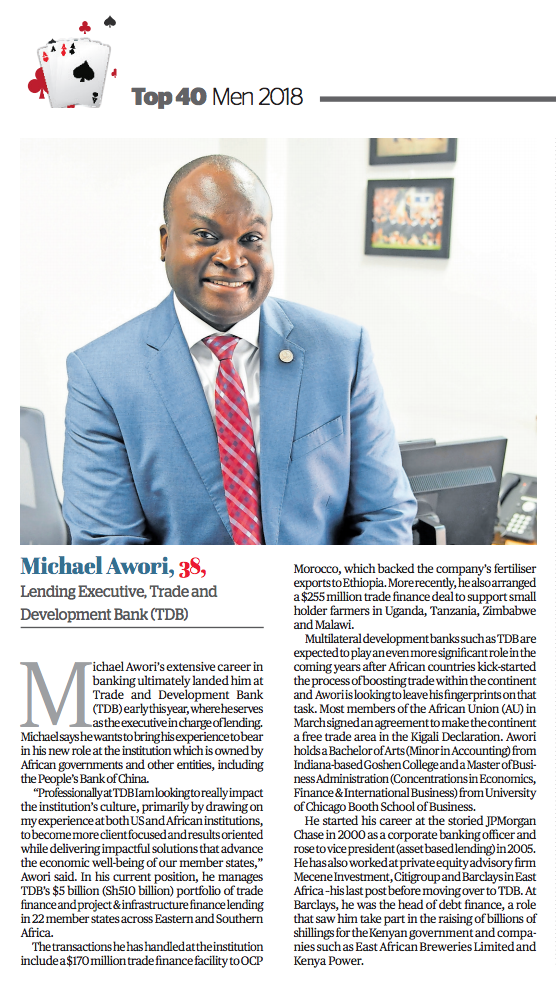 Michael Awori’s extensive career in banking ultimately landed him at Trade and Development Bank (TDB) early this year, where he serves as the executive in charge of lending. Michael says he wants to bring his experience to bear in his new role at the institution which is owned by African governments and other entities, including the People’s Bank of China.

“Professionally at TDB I am looking to really impact the institution’s culture, primarily by drawing on my experience at both US and African institutions, to become more client focused and results oriented while delivering impactful solutions that advance the economic well-being of our member states,” Awori said. In his current position, he manages TDB’s $5 billion (Sh510 billion) portfolio of trade finance and project & infrastructure finance lending in 22 member states across Eastern and Southern Africa.

The transactions he has handled at the institution include a $170 million trade finance facility to OCP Morocco, which backed the company’s fertiliser exports to Ethiopia. More recently, he also arranged a $255 million trade finance deal to support small holder farmers in Uganda, Tanzania, Zimbabwe and Malawi.

Multilateral development banks such as TDB are expected to play an even more significant role in the coming years after African countries kick-started the process of boosting trade within the continent and Awori is looking to leave his fingerprints on that task. Most members of the African Union (AU) in March signed an agreement to make the continent a free trade area in the Kigali Declaration. Awori holds a Bachelor of Arts (Minor in Accounting) from Indiana-based Goshen College and a Master of Business Administration (Concentrations in Economics, Finance & International Business) from University of Chicago Booth School of Business.

He started his career at the storied JPMorgan Chase in 2000 as a corporate banking officer and rose to vice president (asset based lending) in 2005. He has also worked at private equity advisory firm Mecene Investment, Citigroup and Barclays in East Africa –his last post before moving over to TDB. At Barclays, he was the head of debt finance, a role that saw him take part in the raising of billions of shillings for the Kenyan government and companies such as East African Breweries Limited and Kenya Power.