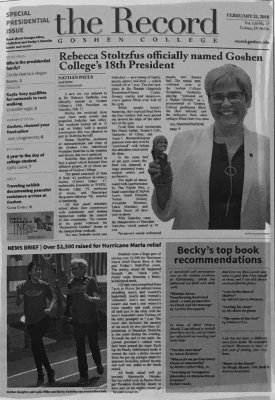 Twenty-one Goshen College students collected 34 awards at the Indiana Collegiate Press Association’s (ICPA) annual convention on March 30, as The Record was named the “Newspaper of the Year” for the second consecutive year in the college division.

This is the third time in four years that The Record, which publishes a weekly print edition and competes against schools across the state with enrollment under 3,000, received the top billing.

The awards recognized Record staff from the spring of 2018, when Emily Kauffman, a 2018 interdisciplinary studies graduate, served as editor in chief, and the fall of 2017, when Kristin Troyer, a senior public relations major, was editor.

The Record confirmed its bona fides in covering several major news stories, including the arrival of a new college president, Rebecca Stoltzfus, and the withdrawal of plans to build a detention facility for the U.S. Immigration and Customs Enforcement.

Abigail King, Nathan Pauls and Kristin Troyer took first place for best continuous reporting of a single story for what the judge called “solid, consistent coverage of the new president and her mission to move the school community forward.”

Siana Emery, meanwhile, took first place for a breaking news story about CoreCivic’s decision to terminate plans to build an ICE facility in Elkhart County. The judge noted: “The concerns of the local community are well explained, and the story offers a lucid portrait of the county leadership.”

The other first-place awards included:

“We were especially pleased to see our contributions in print recognized during a year in which we redoubled our investment on digital platforms,” said Duane Stoltzfus, professor of communication and adviser to The Record. “The staff members are committed to excellence in storytelling, whether in print or online, in text or image.”

The Record received 78 points to finish in first; The Andersonian of Anderson University took second, with 40 points; and The Bachelor of Wabash College finished in third, with 26 points each.