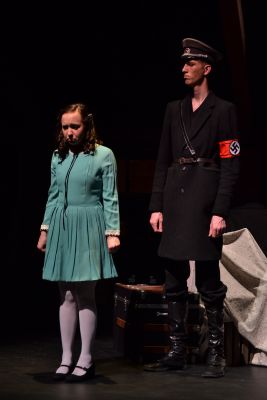 Spring Mainstage: Kindertransport
Date and time: April 1, 7 & 8 at 8 p.m.; April 2 & 9* at 3 p.m. *ASL interpreted
Location: Goshen College Umble Center
Cost: $10 general, $5 students/seniors/GC employees. Tickets can be purchased in advance online at www.goshen.edu/tickets, or through the Welcome Center by at (574) 535-7566 or welcomecenter@goshen.edu. Tickets can also be purchased at the Umble Center box office one hour before the show.

The Goshen College Theater Department will present Kindertransport by Diane Samuels, the story of a Holocaust survivor and her relationship with her daughter, on April 1, 7, 8 at 8 p.m. and April  2 & 9 at 3 p.m. in the Umble Center. The April 9 performance will be ASL interpreted.

Shortly before the outbreak of World War II, the Nazis organized an attack on Jewish people in Germany called Kristallnacht, or night of broken glass. Jewish buildings and businesses were destroyed and people were murdered, attacked and sent to concentration camps. In the wake of this violence, over the next nine months, an initiative to save Jewish children commenced. It was known as the Kindertransport; children left their homes and families in the middle of the night and were sent by train and boat to England. Ten thousand children were saved, and by the end of the war, the majority were orphans.

This production centers around Eva, a young Jewish girl who escapes Germany on the Kindertransport. Now an adult with a daughter of her own, Eva (now Evelyn) is haunted by her past and tormented by deep-seated fears from long ago. Having spent her entire life hiding her roots and keeping secrets, episodes from her past start to come alive around her: her journey to England, the trauma of leaving her family behind and her struggles to assimilate into a new culture. Will Evelyn ever truly be safe? Can she save herself and her relationship with her daughter?

“While Kindertransport moves between two time periods－the 1940s and the 1980s－it is not just a play of the distant or recent past; it’s a play for today,” said Director Anna Kurtz Kuk, assistant professor of theater. “Kindertransport touches on universal and contemporary themes of identity, abandonment, immigration, the plight of refugees and survival. It also deals especially with the mother-daughter relationship.”

Tickets are $10 general, $5 students/seniors/GC employees, and can be purchased in advance online at www.goshen.edu/tickets or through the Welcome Center at (574) 535-7566 or welcomecenter@goshen.edu. Tickets can also be purchased at the Umble Center box office one hour before the show. There will be a ten-minute intermission.