Two buildings on the Goshen College campus will be renamed to honor alumni Octavio Romero and Juanita Lark, two of the first intercultural students to attend Goshen College, officials announced during Homecoming Weekend.

“Naming these buildings for Juanita and Octavio is a fitting tribute to the groundwork they set for the students who came after them and for those students still to come,” said Goshen College President Jim Brenneman. “They led the way for a more multicultural campus, and it feels fitting for Juanita to be commemorated in the first building guests visit on campus, and for students who benefit from Octavio’s scholarships to reside in a residence hall with his name on it.” 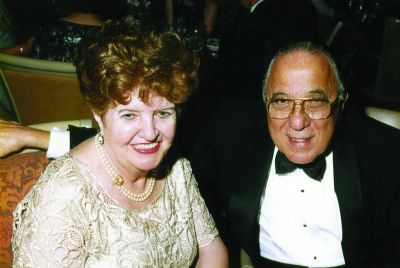 The Student Apartments will be renamed the Octavio Romero Apartments, for Octavio Romero, of San Antonio, Texas, one of the first Mexican citizens to study at Goshen College.

Romero is a 1952 Goshen College graduate who had a long career as a chemist both in the United States and abroad. Originally from Mexico, and currently living in San Antonio, Texas, Octavio and his wife Guadalupe (Pita) have established five endowed scholarships at the college.

They hope that today’s Goshen College community is as special for today’s students as it was for him. And it is their hope that these scholarships will eventually provide opportunities for deserving students to keep Goshen’s core values intact and accessible for all.

As a high school student, when Romero expressed interest in attending college in the United States, his chemistry teacher in Mexico, Harold Miller ’36, encouraged him to take a look at Goshen College. He applied and was accepted, and he said he experienced many culture shocks, but all of them good.

“For the first time in my life I heard that the purpose of getting a college degree was to be able to help other people,” Romero said. “You call this purpose ‘Culture for Service,’ something I had never heard before in my life.”

Romero credits much of his success in life to what he learned from Goshen professors, students and graduates.

While Romero never got used to hymn singing or long Mennonite worship services, he loved his two years at Goshen College. “My values are very similar to Mennonite values,” he said. He made many friends and grew so close to his host family that he still keeps in touch with them.

Octavio and Pita hope that today’s Goshen College community is as special for today’s students as it was for him. And it is their hope that these scholarships will eventually provide opportunities for deserving students to keep Goshen’s core values intact and accessible for all. 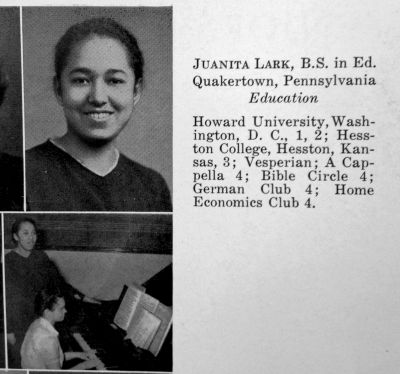 Lark was a 1943 Goshen College graduate who studied education and went on to teach for 38 years in the Chicago Public School system.

Born in 1921 in Washington, D.C., her family moved to a 130-acre farm Quakertown, Pennsylvania, when she was just two years old. She was the second of six children of James — the first African-American Mennonite bishop — and Rowena Lark, and their family was one of only two African-American families in the area.

Lark enjoyed playing the piano and organ, knitting, macrame, quilting and ceramics. She died in 2008.

Lark’s graduation 17 years before Martin Luther King, Jr. presented a lecture at Goshen College in 1960, is listed in the top 10 moments that shaped the African-American history of Goshen College. A dedication ceremony, with family members present, will take place during Black History Month in February 2017 for the Juanita Lark Welcome Center.