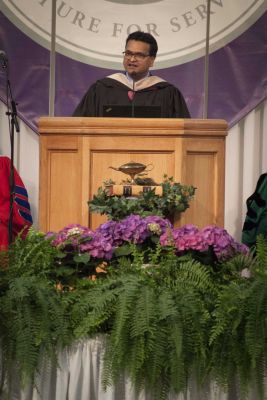 Members of the Goshen College Class of 2015 received undergraduate and graduate degrees after being encouraged by speaker and alumnus Raj Biyani ’92 to add value to the world by focusing on their strengths during the college’s 117th commencement on Sunday, April 26.

The graduates were led in a procession by current and retired faculty into the packed Roman Gingerich Recreation-Fitness Center’s Gunden Gymnasium for commencement.

In his commencement address, “From the Maple City to Cyberabad: What I wish I had known at graduation” Biyani, managing director for Microsoft IT India, talked about how his success in life has come from understanding well his own innate strengths and what energizes him.

“You will be your most creative, most effective, most productive, most resilient self when you figure out how to play to your strengths,” Biyani said.

Biyani shared about his own strengths and how he has learned what energizes him, which include being a learner, having an achiever mindset every day, being a game changer, forging deep relationships with people he trusts and respects, and being in a global role.

“You will never look at the world with the same lenses as you did when you arrived on campus,” he said. “Your global awareness is an asset. Use it well, use it wisely, and use it for the good of the global community.”

Biyani gave the class their final assignment: to determine their own greatest strengths, aspirations and definitions of success.

“I get excited and charged up when I see the impact of software I helped develop on millions of users around the globe,” Biyani said. “Your impact might be quite different, but just as important. … Challenge yourself each morning to add value to the world, big or small, and I guarantee that you will be energized by this.”

Biyani is managing director for Microsoft IT India, Hyderabad, Microsoft’s largest IT operation outside its corporate headquarters in Redmond, Washington. Prior to relocating to India in 2011, Biyani worked in engineering teams across several Microsoft product groups in Redmond. He was on point for Microsoft’s partnership with James Cameron on the making of the movie “Avatar.” Biyani was born in India and moved to the United States to attend college. In addition to his bachelor’s degree from GC, he has an MBA from the University of Chicago. He resides with his wife and two children in Hyderabad, India.

Goshen College Vice President of Academic Affairs and Academic Dean Anita K. Stalter, who will retire in June after 28 years of service to the college, was recognized during the ceremony. She is the second longest serving Academic Dean in Goshen College’s history.

At the baccalaureate worship service in the morning before commencement, President James E. Brenneman delivered a sermon titled “Moving Beyond Borders: Bringing Hope and Healing to the World,” based on Isaiah 58:6-9. He focused on the first spoken words by the Creator God, “Let there be light,” inviting the graduates to “let your light shine for all it’s worth!”

“The dawning lights are those who loose the chains of injustice, set free the oppressed, share their food with the hungry, provide shelter to the poor, clothe the naked, and never turn away from their fellow human beings in need,” Brenneman said. “You are the dawning lights.

“Dawning lights overflow borders readily … to shine across national, denominational, political, geographical, ideological, racial, ethnic and sexual lines drawn in the sand,” he said. “Let us rise to hold the Christ-light for others, so that those who walk in darkness will see light that is the light of the world.”

This year 152 graduates signed the Graduation Pledge of Social and Environmental Responsibility, a national program at more than 100 colleges and universities. By signing the pledge, the graduates promised to “explore and take into account the social and environmental consequences of any job I consider and will try to improve these aspects of any organizations for which I work.”

Other events during the busy weekend at Goshen College included a senior program, which showcased the talent of the Class of 2015, a senior art exhibit, academic department receptions for graduates and their families, a nurse’s pinning ceremony and an evening reception hosted by President Brenneman and his wife, Dr. Terri J. Plank Brenneman.