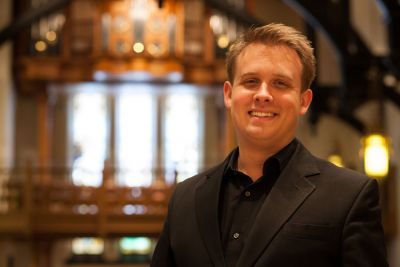 Tickets are $10 for general admission seats, available online at goshen.edu/tickets or by calling the Goshen College Welcome Center at (574) 535-7566. Goshen College students are admitted free with ID. Seating is limited.

A native of Great Britain, Simon Thomas Jacobs spent a year as organ scholar at All Saints’ Margaret Street – an historic Anglo-Catholic parish in London’s West End – before taking up the position of organ scholar at Clare College, University of Cambridge, where he graduated with an honors degree in music in June 2009. Performance highlights with the choir included concerts as part of the Salzburg Music Festival, Munich Opera Festival and the London, Innsbruck and Potsdam Early Music Festivals, as well as several commercial CD recordings.

Upon graduation, Simon took up the post of associate director of music at Christ Church, Greenwich, Connecticut, and in 2011 became associate organist and choirmaster at Christ Church Cathedral, Indianapolis. Most recently, he completed an Artist’s Diploma at Oberlin College, where he studied with James David Christie.