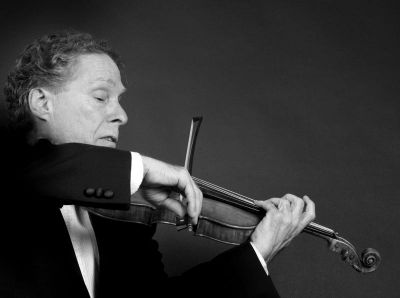 Charles Castleman, professor of violin at The Eastman School of Music and Miami (Florida) University, will present a visiting artist recital on Friday, Feb. 6 in Rieth Recital Hall, in the Goshen College Music Center. The recital will begin at 7:30 p.m.

Castleman, a highly regarded violin performer and pedagogue, is a former teacher of Goshen College Associate Professor of Music and violinist Dr. Solomia Soroka. His program will feature works by J.S. Bach, Spohr, Brahms, Ysaye and Piazzola. He will be joined by guest musicians Soroka, violin, and Arthur Greene, piano.

Tickets, available at the door one hour before the concert, are $7 for adults and $5 for seniors and students. Goshen College faculty, staff and students are free with valid ID.

Charles Castleman, perhaps the world’s most active performer/pedagogue on the violin, has been soloist with the orchestras of Philadelphia, Boston, Brisbane, Chicago, Hong Kong, Moscow, Mexico City, New York, San Francisco, Seoul and Shanghai. Medalist at Tchaikovsky and Brussels, his Jongen Concerto is included in a Cypres CD set of the 17 best prize-winning performances of the Brussels Concours’ 50-year history.

Selected by the Ford Foundation as one of the sixteen most important concert artists under the age of 35, Castleman has performed at such international festivals as Marlboro, AFCM (Australia), Budapest, Fuefukigawa, Montreux, Shanghai, Sheffield, and the Vienna Festwoche. His recitals have been broadcast on NPR, BBC, in Berlin and in Paris.

Professor and former string department chair at the Eastman School, Castleman has conducted master-classes in London, Vienna, Helsinki, Kiev, Hong Kong, Shanghai, Beijing, Seoul, Tokyo, and all major cities in Australia, Canada and New Zealand. His students have been winners at Brussels, Munich, Naumburg and Szeryng, are in 30 professionally active chamber groups and are first desk players in 11 major orchestras. He is founder/director of The Castleman Quartet Program, in its 45th season, now at S.U.N.Y Fredonia, an intensive workshop in solo and chamber performance. Yo-Yo Ma has praised it as “the best program of its kind… a training ground in lifemanship.”

Castleman earned degrees from Harvard, Curtis and University of Pennsylvania. His teachers were Emanuel Ondricek (teaching assistant of Sevcik, Ysaye student) and Ivan Galamian; his most influential coaches were David Oistrakh, Szeryng and Gingold. He plays the “Marquis de Champeaux” Stradivarius and “Sammons” Goffriller from 1708, and chooses from over 80 bows.