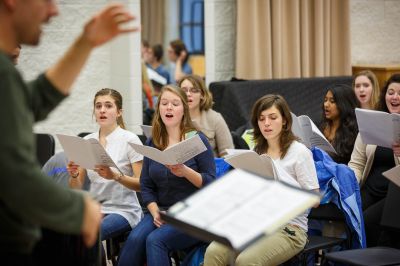 Goshen College sent 13 vocalists to compete at the annual National Association of Teachers of Singing (NATS) competition at Indiana Wesleyan University on Nov. 1, 2014. More than 300 singers competed at the event.

“All our students gave strong performances, and it is a testament to the quality of our vocal program that such a high percentage placed in their category,” said Scott Hochstetler, associate professor of music. “We are so proud of their talent, dedication and love for singing.”

The NATS competition is an annual event that draws students from colleges and universities across the state, including Anderson University, DePauw University, Ball State University, Indiana University and others. Each student competed in divisions separated according to age and year, with various subgroups within each division. Along with the students, professor of music Debra Brubaker, Hochstetler, and adjunct voice professors Rebecca Dengler Kaufman and Sandy Hill attended and served as judges. Accompanying the students on piano were Christine Larson Seitz and Chara Sonntag.