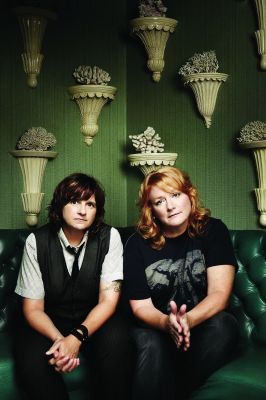 The soothing voices and strong harmonies of Indigo Girls are coming to Goshen College’s Sauder Concert Hall on Saturday, Sept. 13 at 7:15 p.m., the opening concert in the college’s Performing Arts Series.

Known for their soulful lyrics, the Indigo Girls—Amy Ray and Emily Saliers—deliver well-crafted songs that are both spirited and simple. Their voices “soar and swoop as one, alternately raucous and soothing,” said Rolling Stone.

Now decades into their career, the Indigo Girls have been electrifying audiences since the late 1980s, when Saliers and Ray began performing together in high school. In 1989, their career took off, and the duo has been touring ever since. They have traveled from Atlanta to London to New York City, selling over 12 million records and earning a Grammy along the way.

The Indigo Girls have earned a devoted fan base thanks to their dedication to songwriting as well as social and environmental causes.

Opening for Indigo Girls is Angaleena Presley, a singer/songwriter out of Nashville who also performs as part of Pistol Annies along with Miranda Lambert and Ashley Monroe.