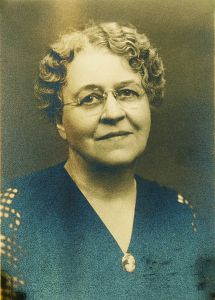 On Sept. 10, 1935, 62-year-old Ina Kronk Slate registered for her senior year at Goshen College. Already a familiar figure on campus, this doyenne of Goshen civic society had served GC as instructor for public school art from 1916-1923, and possibly had designed the first college seal. In the summer of 1933, Slate had decided to begin full-time studies as a GC student. She recorded details of her student life in a scrapbook, with details running from mundane to momentous: the decision to start parting her hair on the side, a disruptive visit by her dog Ginger to a morning chapel service, the sudden death of her husband George, president of Western Rubber, and her own subsequent election as first vice president of the Goshen company.

Now, for her senior year, Slate was taking up residence in a private room in Kulp Hall, sparing the need to commute from her stately brick home at 628 S. 5th St., almost a mile away. Her daughter Frances Latta helped her arrange some personal furnishing in the room. Gracious administrators granted her dispensation to have a hot plate in her room enabling her to prepare her own breakfasts (normally residents were permitted only one extra electric lamp). 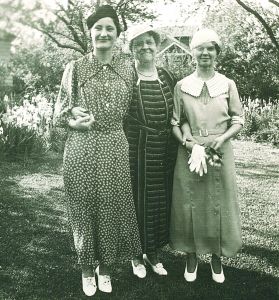 From her dormitory room, she was better able to concentrate on both her studies and extracurricular activities. A French and German major, she busily broadened her own horizons and contributed to the experiences of her fellow students. She relished the kindness of secret dormitory “heart sisters,” or the time Evelyn Burkholder Kreider ’36 brought her a cushion to soften the cement bench where she studied in front of the Adelphian fountain. She burst into tears when Dean Harold S. Bender called on her to speak one day in sociology, but reveled in the compliments paid her work in various language and literature classes.

She served as president of the Vesperian Literary Society and helped organize the senior class “sneak,” an overnight excursion to an Ohio lake. Students and faculty alike benefitted from her generous gifts: flowers (especially roses), special treats, outings to restaurants near and far, even an expedition to the opera and Chicago Art Institute. During the year of campus residence, Slate survived the vicissitudes of dormitory heating (a memory that later prompted a generous $500 gift for a new heating plant).

In June 1936, when she received her bachelor’s degree, Slate was the oldest student to have graduated from GC at the time.