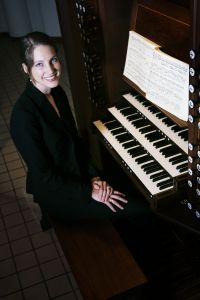 Concert: Carrie Groenewold, organist
Date and time: Sunday, Sept. 15, 4 p.m.
Location: Rieth Recital Hall
Cost: $10 general admission. Tickets available via the Welcome Center at (574) 535-7566 or at the door one hour before the concert.

Kansas organist Carrie Groenewold will open Goshen College’s inaugural Rieth Chamber Series with an organ recital in Rieth Recital Hall on Sunday, Sept. 15. The concert begins at 4 p.m. and will be performed on Goshen’s acclaimed Taylor and Boody pipe organ.

Installed and dedicated in 2005, the organ is designed and based on eighteenth century North German organ building principles and features more than 1,600 pipes. Groenewold will present a concert of works by Bach, Sweelinck, Mendelssohn, Reincken and Francisco Correa de Arauxo.

An informal reception in the Music Center lobby will follow the concert, and a tour of the organ will be available for any interested audience members.

Groenewold is currently completing a doctor of musical arts degree in church music (organ emphasis) at the University of Kansas, where she studies with Michael Bauer. She received a master of sacred music degree from the University of Notre Dame in 2008, studying organ with Craig Cramer. Groenewold has served a number of churches as organist and choir director, including St. John’s Episcopal Church in Elkhart (Ind.), and is currently the organist at First Presbyterian Church in Lawrence, Kan.

Individual tickets for this concert are available at the Goshen College Welcome Center by calling (574) 535-7566, online at www.goshen.edu/tickets, or at the door as available. Tickets are general admission; seating is limited.

The Rieth Chamber Series features six concerts by outstanding chamber music ensembles and organists, plus a bonus concert and reception for series subscribers only. Music Center Executive Director Marcia Yost explains that series supporters “will provide support for ongoing, accessible classical chamber music at Goshen College, as well as aid in establishing a reputation with performing artists for appreciative Music Center audiences.” More information about this series is online at www.gcmusiccenter.org/concerts/riethseries.