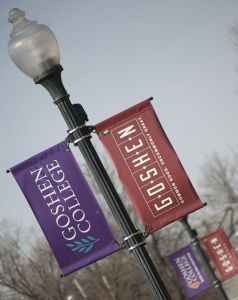 Goshen residents will have an opportunity to explore renovated spaces at Goshen College, experience a live broadcast of 91.1 The Globe and win prizes, including an iPad mini, during a community fair and open house on Sunday, March 24 from 2 to 4 p.m.

Guests will also have the chance to register for a number of giveaways in addition to an iPad mini, such as Performing Arts Series tickets, a college cabin rental, passes to the college’s Recreation-Fitness Center, a Music Together class for children, student artwork and tickets for upcoming student musical and theater performances. Goshen College’s student-run, award-winning radio station, 91.1 The Globe, will broadcast live from the lobby of the Union building, and guests will have the opportunity to meet the DJs and experience the radio station in operation. The Globe was just awarded “Best College Radio Station in the Nation” for the second time in three years by the Intercollegiate Broadcasting System, and was named “Radio School of the Year” in Indiana for the last two years by the Indiana Association of School Broadcasters.

In 2012, the Union Building underwent a renovation that transformed the west half of the old gym into new office spaces, a conference room, reception area and renovated bathrooms. The project was funded by the Lilly Endowment, which in 2006 granted $12.5 million to Goshen College to establish the Center for Intercultural Teaching and Learning (CITL), now known as the Center for Intercultural and International Education (CIIE). CIIE encompasses what was once the Multicultural Affairs Office, CITL, and the International Education and Study-Service Term (SST) programs.

“Although the emphasis is on the remodeled spaces in the Union Building, we really hope this event will attract folks who are not familiar with Goshen College or just curious to know more about this community asset,” said Jim Caskey, vice president for institutional advancement at Goshen College.