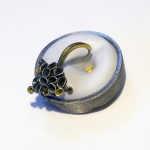 GOSHEN, Ind. – Seattle metalsmith, writer and teacher Andy Cooperman will be the Goshen College Eric Yake Kenagy Visiting Artist for 2011-12. His exhibit will be on display in Goshen College Music Center’s Hershberger Art Gallery from Jan. 29 to Feb. 19. On Sunday, Feb. 12 at 4 p.m. in the college’s Administration Building, room 28, Cooperman will present a lecture, followed by a reception in the Hershberger Art Gallery. All events are free and open to the public.

Jewelry has been Cooperman’s primary art focus, though he also makes small sculptures, architectural details, hollowware and tableware. From commissioned rings to one-of-a-kind brooches and neckpieces, all of his work is forged, fabricated and cast in his Seattle studio.

Cooperman’s work has been featured in private and public collections, including the Victoria and Albert Museum, Central College in Pella, Iowa, and the Tacoma Art Museum. His work was shown most recently in “Esoterica: Through the Looking Glass,” a solo exhibition at the National Ornamental Metals Museum in Memphis, Tenn., and in the group exhibition, “Radical Alchemy,” in the Courthouse Galleries in Portsmouth, Va. Cooperman teaches and lectures nationally, and taught in the metals program at the University of Washington from 2006-08.

Much of Cooperman’s work is grounded in science. As a boy, he became inspired when he opened a scientific catalogue and was introduced to a world of particles and bacteria that is invisible to the unaided eye.

“The notion that a complete universe could exist, literally at my fingertips, changed the way that I looked at everything,” said Cooperman. “And it’s from this perspective, through the lens of curiosity and examination, that I most enjoy peering. It is my aim, through my work, to offer a compelling reason for others to enter into the investigative process.”

The Hershberger Art Gallery is located near the north lobby of Goshen College’s Music Center at College Avenue and 12th Street in Goshen. The gallery hours are 9 a.m.-4:30 p.m. on weekdays, 1-4 p.m. on Saturdays and 2-4 p.m. on Sundays. Hours vary during school vacations, and there are additional gallery hours on concert dates.

The Eric Yake Kenagy Visiting Artist program honors the late Eric Yake Kenagy, who was a gifted ceramics student at Goshen College from 1984 until his death in 1986. Through this program, his family and friends wish to celebrate the creativity Eric expressed in his too-short life, and to share with Goshen College and its friends events that will inspire others to develop their own creativity.

For more information about Cooperman and his work, go to andycooperman.com.