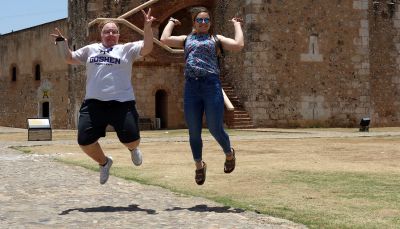 Stephanie and Katherine use early 16th century magic to float 1 foot off the ground.

On Thursday the group took a field trip to the historical colonial center of Santo Domingo, a UNESCO World Heritage site.  It was the third settlement founded by Christopher Columbus and the only one that survived.  From here, specifically from the Royal Court that we visited, Spain’s Conquistadors got their marching orders: Hernan Cortez to Mexico, Francisco Pizzaro to Peru, Ponce de Leon to Florida, and so on.

For several years the son of Christopher Columbus lived here, and we also got to visit his stately house, now a museum, as well as the Ozama Fortress built by the Spanish starting in 1502 (only 10 years after Columbus’ first arrival) to protect the city from British pirates.

We had lunch at a nice restaurant in the colonial city, and then the students took their time wandering down a pedestrian mall lined with souvenir shops.