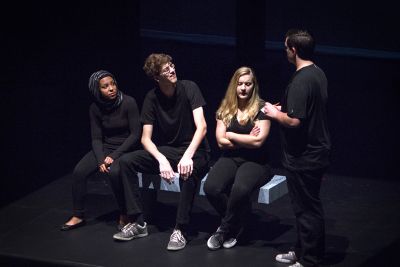 Written by Jonathan Graham, “Bombers” is returning to Goshen College, where it was the 1998 Peace Play prize winner.

“Given that the last edit to the script of ‘Bombers’ was ten years ago, the subject matter and themes are still strikingly and painfully real today,” said the play’s director, Nick Peebles, a junior theater and communication major from Chicago. “Islamophobia, victim-blaming/rape culture, media bias, terrorism and racism are still massive social, political and cultural issues, and show no signs of diminishing.”

This story is not simply representation of these issues and our reactions to them, though. The script goes so far as to accuse the audience of the play, pointing out how eager we are to blame someone different from ourselves for a violent act. The end result is an aggressive, direct and frighteningly relevant critique of our society and our collective knee-jerk reactions to violence.

“This play has been living in the back of my mind ever since it won the GC Peace Play Contest,” said Doug Liechty-Caskey, professor of theater. “We so quickly rush to judgment with every ounce of ‘breaking news’ hoping to make sense of the world’s horrors by blaming everyone but ourselves.”

Tickets for the show cost $5 and are available through the Welcome Center by calling (574) 535-7566, or at the Umble Center Box Office an hour before the show. There will be no intermission.

Note: This play includes mature content and some offensive language.