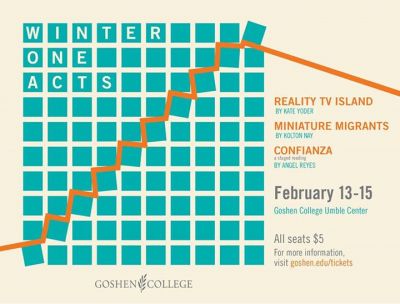 THE SATURDAY, FEB. 14 PERFORMANCE IS CANCELLED DUE TO WEATHER

The Goshen College Theater Department will perform three plays during the Winter One Acts – “Reality TV Island,” “Miniature Migrants” and “Confianza” – on Friday, Feb. 13 (ASL interpreted), and Saturday, Feb. 14 at 8 p.m. and on Sunday, Feb. 15 at 3 p.m. in Goshen College’s Umble Center.

All three plays are written and directed by current Goshen College students, and explore popular ideas and issues in the United States through both humor and seriousness.

“The Winter One Acts are a vital part of GC’s educational theater program, providing students with the opportunity to further develop skills in both leadership and collaboration,” said Doug Liechty Caskey, professor of theater and producer. “So it’s doubly exciting when the plays we’re offering this year are also written by our own students.” 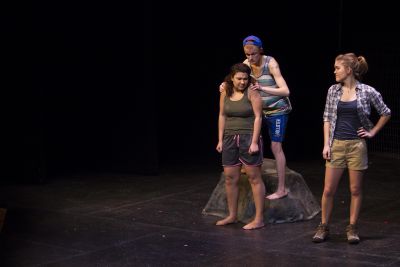 The play focuses on a group of young adults on a deserted island who encounter an unexpected set of tasks. What follows is a fun-filled quest for entertainment—until one of them begins to question how they are going to remain alive. “Reality TV Island” highlights the tendency humans have to blindly follow the rules of society, and the tendency to push aside voices of dissent. 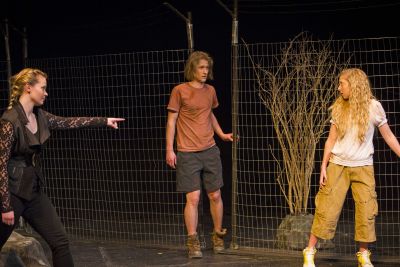 Exploring some of the issues surrounding border crossings, “Miniature Migrants” tells the tale of two children, Angie and Eric. When their family runs out of options, it’s up to Angie and Eric to provide the food to survive.

The third performance will be a staged reading of “Confianza,” written and directed by Angel Reyes, Jr., a senior theater major from Leesburg, Indiana, as part of his senior recital requirement. Paul Zehr, a junior music and theater major from Carthage, New York, is stage manager.

The Spanish word confianza can be translated to various English words, including “confidence,” “trust” and “hope.” In an effort to show one way a family works in times of trouble, Reyes bears witness to some of the change in his own work as an artist and as an individual. With the right support and resources, the preconceived notion of “impossible” can be made reality.

Tickets for the show cost $5 and are available through the Welcome Center by calling (574) 535-7566, online at goshen.edu/tickets or at the Umble Center Box Office an hour before the show. There will be no intermission.