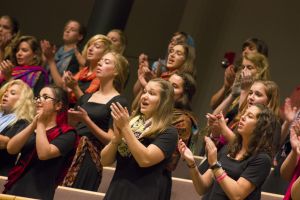 The Goshen College Women’s World Music Choir will conclude their spring break tour to Pennsylvania with a “home concert” in the Music Center’s Sauder Concert Hall on Sunday, March 2, 2014 at 7:30 p.m.

The choir will perform songs in 10 different languages and from places such as Yemen, Iraq, New Zealand, Mali, South Africa, Spain, Russia, the American South and Appalachia. There will be several opportunities during the program for the audience to join the choir in song.

“Many of the songs in the tour’s repertoire celebrate the community created by women at important times in their lives – sung lullabies, marriage, standing up for one’s own individuality, recognizing the strength in the community of sisters surrounding them,” said Deb Brubaker, professor of music and director of the Women’s World Music Choir.

The concert is free and open to the public, though a free-will offering will be held to help cover tour costs.

The Goshen College Women’s World Music Choir was formed in the spring of 2004. Its goals are to discover and perform music of many cultures, both national and international, particularly indigenous cultures. The choir also serves to highlight the role of women in these cultures, celebrating the unique spirit and energy that women bring to the world as creators, sustainers and disrupters of life and culture. 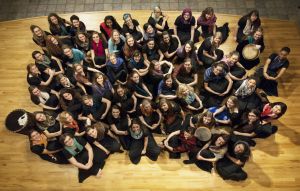 Brubaker holds a doctorate in musical arts from the University of Kansas, a master’s degree in music from the University of Northern Colorado and a bachelor’s degree in music education from Goshen College. She was assistant professor of music at Bluffton (Ohio) University for 10 years and has taught choir in public schools in Indiana and Colorado. Since coming to Goshen in 1999, Brubaker has directed the Goshen College Chorale and Chamber Choir, and in 2004 created the Women’s World Music Choir, which performed at the 2008 central division conference of the American Choral Directors Association in Grand Rapids, Mich.