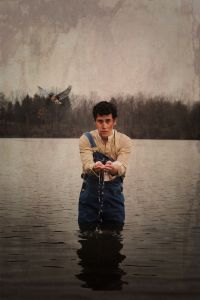 Spring mainstage play: “The Diviners” by Jim Leonard, Jr.
Date and time: April 5, 6 and 12 at 8 p.m.; April 7 and 14 (ASL interpreted) at 3 p.m.
Location: Goshen College’s Umble Center
Cost: Tickets cost $10 for general admission and $5 for students and seniors, and can be purchased in advance through the Welcome Center by calling (574) 535-7566, emailing welcomecenter@goshen.edu or online at www.goshen.edu/tickets. Tickets can also be purchased at the Umble Center Box Office one hour before the show.

The Goshen College Theater Department will present Jim Leonard, Jr.’s award-winning play “The Diviners” for the spring mainstage production on April 5, 6 and 12 at 8 p.m. and on April 7 and 14 (ASL interpreted) at 3 p.m. in Goshen College’s Umble Center. Tamara Izlar, assistant professor of theater, is the director and Doug Liechty Caskey, professor of theater, is the producer.

Set in the fictional southern Indiana town of Zion during the Great Depression, the play features Buddy Layman, a disturbed young man who is deathly afraid of water after almost drowning when he was young and losing his mother in the same accident. Nonetheless, Buddy, played by senior Sammy Rosario (San Juan, Puerto Rico), has an uncanny gift for finding water, or “divining.” When a disenchanted preacher named C.C., played by junior Joel Kawira (Shirati, Tanzania), comes to town, the two form a special friendship. But their friendship ends when a sacred event turns tragic.

“‘The Diviners’ play brings into focus our dependence on water, both as a natural and spiritual resource, ranging from a farmer’s need for rain and a continuous water supply to a religious community’s need for water to baptize believers,” said Liechty Caskey.

Leonard wrote “The Diviners” in 1980 as a 19-year-old college student and is now an established playwright. It was the winning play at the American College Theater Festival. In 1989, Goshen College produced the play under the direction of former theater professor Lauren Friesen. “A number of people who saw a 1989 performance still remember the powerful emotional impact the play had on them, and they’ve expressed an eagerness to see our 2013 version of the play under Tamera Izlar’s direction,” said Liechty Caskey.

The timing of the play and connections to current realities also makes it particularly relevant for audiences today. “In a year when natural disasters continue to impact us amid our dependence on rain and clean water for daily living, we realize even more how we need to cooperate as a society in both resource management and to communicate clearly our spiritual and physical needs,” said Liechty Caskey. “If we’re paying attention, we’re constantly reminded of our interdependence with each other and with God.”

Umble Center is accessible to wheelchairs and people with other physical limitations. American Sign Language interpretation will be offered during the April 14 performance of the play.