Paintings by Abner Hershberger, Emeritus Professor of Art at Goshen College, that explore historical Mennonite and agrarian themes by manipulating images from the family photo album. Small black and white photos were enlarged to provide industrial-sized negatives, which allowed life-size images to be screen-printed on individual canvases. Completed in 1996-97, the series is on loan from the Midwest Museum of American Art in Elkhart. 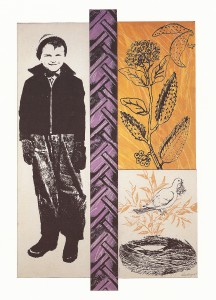 Sponsored by the Mennonite-Amish Museum Committee.

Hershberger’s exhibit pulls from his experience as the ninth of 10 children raised on a farm in Fargo, N.D. Hershberger writes that his “life and world view were strongly influenced by farm work, reliance on family and a strong identity with the church community.”

One day in 1991, Hershberger was driving through Illinois and recalled a photo of his father dressed in a plain coat. The image inspired him to create a show of “Mennonite iconography,” a documentation of both heritage and memory. Hershberger writes that the icons attempt to show the “directness, truth telling and simplicity” of Mennonite communal living.

The paintings are produced with black and white photos from Hershberger’s family albums that were enlarged to create industrial-sized negatives. The negatives were then screen-printed onto canvas and painted in a monochromatic style, forming a simple but modern effect.

Hershberger taught painting and printmaking in the Goshen College Art Department from 1965-99. He received a master of fine art degree from the University of Michigan and has showcased over 20 solo shows. His work can be viewed at www.abnerhershberger.com.