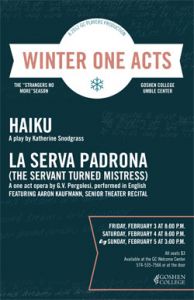 GOSHEN, Ind. – Goshen College’s 2012 Winter One Acts will feature a playful opera and a modern drama, each about the misconceptions of identity, directed by two December 2011 graduates. The Goshen College Players will present “Haiku,” by Katherine Snodgrass and directed by Josh Hofer, and “La Serva Padrona (The Servant Turned Mistress),” by Giovanni Pergolesi and directed by Patrick Ressler, on Saturday, Feb. 3 and Friday, Feb. 4 at 8 p.m., and on Sunday, Feb. 5 (ASL interpreted) at 3 p.m. in Goshen College’s Umble Center.

Snodgrass’ “Haiku” features Louise, a severely brain-injured girl who, at times, has intervals of being miraculously “normal.” Sometimes, she is so super normal that she speaks in beautiful haiku poetry. Her mother has published the poems under her own name. When an older daughter visits, she refuses to believe that her sister Louise composed the extraordinary poems.

Winter One Acts: “Haiku,” by Katherine Snodgrass and “La Serva Padrona (The Servant Turned Mistress),” by Giovanni Pergolesi
Date and time: Feb. 3, 4 at 8 p.m. and Feb. 5 (ASL interpreted) at 3 p.m.
Location: Goshen College’s Umble Center
Cost:Tickets cost $3, available through the Goshen College Welcome Center by calling (574) 535-7566, emailing welcomecenter@goshen.edu, online at goshen.edu/tickets or at the Umble Center Box Office an hour before the show.

“La Serva Padrona” is a one-act opera about a maid who schemes to marry her master. This comedic intermezzo by Pergolesi employs disguises, trickery and witty banter through recitative to tell the story of Uberto, Serpina and the mute page, Vespone.

“Both of these plays have their way of connecting to our “Strangers No More'”season in that the characters are trying hard to figure out the real identity of other characters,” said Doug Liechty Caskey, professor of theater. “Many questions and misconceptions about true identity are revealed along the way.”

Tickets for the show cost $3, and are available through the Welcome Center by calling (574) 535-7566, emailingwelcomecenter@goshen.edu, online at goshen.edu/tickets or at the Umble Center Box Office an hour before the show.