One of the texts for our term is Hans Rosling’s Factfulness: Ten Reasons We’re Wrong About the World – and Why Things Are Better Than You Think.  I believe one of the great benefits of the book is that it provokes really interesting discussions and conversations among students. The book provides, in very broad strokes, context for how we might understand our study-abroad experience within a much larger conversation of international and global systems and development. In our journals last week we asked students to reflect on the first several chapters of Factfulness; what misconceptions they might have employed in the past, how Roslings’ perspective has informed their experience of Ecuador so far and asked for affirmations or criticisms of the book. This reflection was a wonderfully insightful and thoughtful response submitted by Grace Hitt:

In the past, I have certainly employed the negativity instinct. Rosling defines this as “our instinct to notice the bad more than the good” because of “the misremembering of the past, selective reporting by journalists and activists, and the feeling that as long as things are bad it’s heartless to say they are getting better” (65). As Cade mentioned in our Casa Goshen time, our generation has always been told how bad the world is, which means we have to some degree grown up on the negativity instinct. I think particularly with regards to climate change, it feels like the world continues to get worse, or at least does not get better fast enough to avert disaster. I also tend to expect or prepare for the worst in my personal life because of my anxiety. It’s an instinct I’ve been actively trying to counter and against which I have made progress.

Anxious tendencies also fostered my employment of the fear instinct. Rosling defines the fear instinct, in essence, as a distorted worldview in which we see the world as much more dangerous than in the past, while in reality it is safer than it has ever been (106-107). Most recently, I noticed myself employing this instinct with regards to the COVID-19 pandemic. While it’s important and, I think, a mark of respect to default to wearing a mask and being cautious, I have often delayed in relaxing preventative measures when there is lower risk. For example, I refused to eat inside with others at all until after I was vaccinated, and I continued to wear a mask when Goshen College lifted its mandate and county numbers were low. I think the negativity and fear instincts are linked because a negative view promotes overestimation of risk, which fosters fear.

I would say that neither of these two instincts has had a huge impact on my understanding of Ecuador so far. Instead, the chapters about the size instinct and the generalization instinct have helped me to reframe my experience. Rosling defines the generalization instinct as “mistakenly group[ing] together things, or people, or countries that are actually very different” and “mak[ing] us assume [that] everything or everyone in one category is similar” (146). As an antidote, Rosling recommends looking for “differences within groups” and “similarities across groups” (165).

Factfulness’s four income levels have helped me realize that while it is not what I am used to, my host family is comparatively well-off in the global socioeconomic scheme. These income levels have also helped me pay attention to the people participating in the informal economy by selling things on buses or on the street, and I often wonder what their living situation is like.

Additionally, I have noticed similarities of opinion between my host family and myself. We share a concern with the rights of women and an interest in justice. Even though we come from different backgrounds, we can arrive at a consensus even on controversial issues like abortion. On a broader scale, some of the rhetoric around Venezuelan immigrants in Quito reminds me of rhetoric about Latino immigrants in the United States. Rosling’s advice to counter the generalization instinct helps me understand Ecuador as both a diverse place and a country in which people worry and reflect about many of the same issues we do in the United States.

Factfulness encourages us to pay more attention to the world around us and to approach people and situations with an attitude of openness rather than pity or judgment. I think this method of approaching the world helps us be more flexible, more grateful, and (paradoxically, given one of my critiques) more relationship-centered. One specific recommendation of Factfulness not previously mentioned that I affirm is Rosling’s recommendation that we seek out numbers to compare to those we see in the news and that we examine rates rather than simply raw numbers (143). I agree with Rosling about the need to “get things in proportion” (143). Rosling’s emphasis that “the world is much better than you think” could provide much-needed hope to people feeling jaded or burnt out about activism and the state of the world (51).

Though there are valuable aspects of Factfulnessthere are also gaps and criticisms to levy. First, Rosling’s tone often comes across as incredibly condescending, like when he notes in the introduction, “I had great fun telling everyone that they were emperors with no clothes, that they knew nothing about the world” (11). Yes, Rosling was knowledgeable, and yes, he did know more about the world than these people, but that does not mean he needed to be smug about it. Second, Rosling at times demonstrates a disturbing lack of concern for individuals. I found this cavalier attitude most jarring in his section about infant mortality. Rosling dismisses the grief of individual families, querying, “But who would be helped by these tears?” (131). It may not be practical to grieve for every loss, but I believe that to allow a space for that grief recognizes the inherent value in every person and respects those closest to the loss.

Finally, I object to Rosling’s characterization of “the secret silent miracle of human progress” as the ultimate goal (51). I don’t think that progress is a universal concept. In the nineteenth century, many Europeans and people from the United States saw empire as progress and a way to bring “civilization” to “uncivilized” peoples. Today, we recognize that empire was not progress, and we now have to deconstruct and repair the harm done by imperial powers. What might we today conceive of as progress that is actually harmful? Also, people with different worldviews, like that expounded by the indigenous spirituality we learned about from Jonathan Minchala, likely define progress differently. Rosling seems to favor progress along an economic model, which I think neglects a necessary examination of justice and sustainability issues. I suppose overall what I want from Factfulness is more nuance. 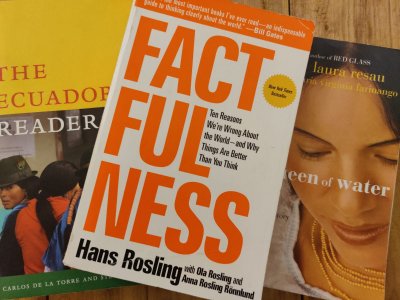 If you’re interested in more, here is a link to an interesting online tool connected to the book that we’ve encouraged students to explore: