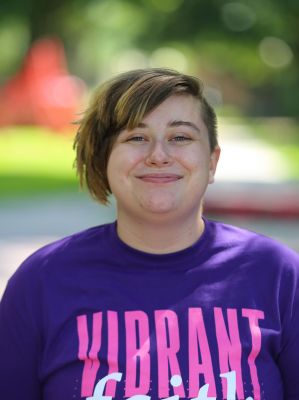 I am a chronic over-committer. I have so much that I want to do! Plus, it seems as though every little thing needs fixing, and I certainly can’t trust others to get it done right. That mindset has gotten me good grades on a lot of group projects. It’s also how I ended up burning out before the semester was over and coasting to the finish on fumes.

In this Bible story, David has a grand vision. He wants to build God a home, a luxurious temple. And God, very politely, says no. God asks David, “Are you the one to build me a house to live in?” Apparently, David isn’t. The (mostly) perfect King David, the golden boy of the Hebrew Bible, is not meant for this task.

As I look at everything I want to do, everything I want to fix, I am forced to admit that I can’t do it all. There are some tasks that I’m not meant for. David never built his temple; that work was passed to Solomon, and from it came one of the wonders of the ancient world.

We are part of a community, and that means relying on others to share the burden. This Advent season, as we travel on the road, remember: you’re not on this road alone.

4But that same night the word of the Lord came to Nathan: 5Go and tell my servant David: Thus says the Lord: Are you the one to build me a house to live in? 6I have not lived in a house since the day I brought up the people of Israel from Egypt to this day, but I have been moving about in a tent and a tabernacle. 7Wherever I have moved about among all the people of Israel, did I ever speak a word with any of the tribal leaders of Israel, whom I commanded to shepherd my people Israel, saying, “Why have you not built me a house of cedar?” 8Now therefore thus you shall say to my servant David: Thus says the Lord of hosts: I took you from the pasture, from following the sheep to be prince over my people Israel; 9and I have been with you wherever you went, and have cut off all your enemies from before you; and I will make for you a great name, like the name of the great ones of the earth. 10And I will appoint a place for my people Israel and will plant them, so that they may live in their own place, and be disturbed no more; and evildoers shall afflict them no more, as formerly, 11from the time that I appointed judges over my people Israel; and I will give you rest from all your enemies. Moreover the Lord declares to you that the Lord will make you a house. 16Your house and your kingdom shall be made sure forever before me; your throne shall be established forever.